The French Kitchen rolls out crisp and wine gift boxes 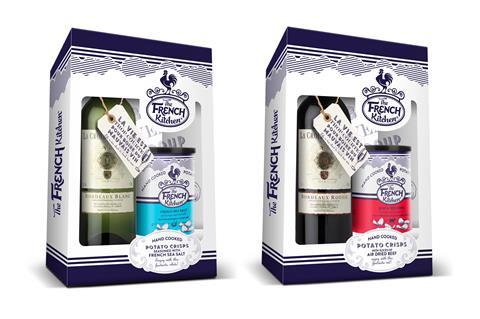 Hand-cooked crisp brand The French Kitchen has launched two “premium” crisp and wine gift boxes ahead of the festive season.

The gift boxes contain a 375ml bottle of either red or white bordeaux from La Croix Chassors and a 75g sharing drum of crisps (rsp: £10).

The gift boxes are the latest launch from The French Kitchen, which also manufactures crisps in Snail & Garlic and Sea Salt & Chardonnay Vinegar flavours, as well as those included in the gifts.

The French Kitchen co-founder Gavin Bacon said the decision to pair the crisps with wine in a gift box came after he and business partner Mark Unsworth had offered a small sample of wine alongside their products at trade shows and received “phenomenal feedback”.

He added that it “made sense” to put the two together and create gift boxes for Christmas.