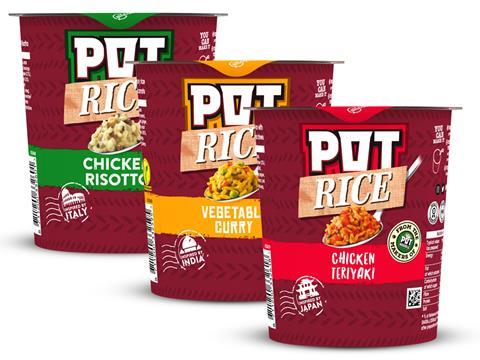 Variants are ‘inspired by popular recipes from India, Japan and Italy’

The dehydrated rice snack, which made its debut in the early 1990s, began rollout this week in three variants “inspired by popular recipes from India, Japan and Italy”: Vegetable Curry, Chicken Teriyaki and Chicken Risotto (rsp: £1.39/75-87g).

Each is made with sustainably sourced ingredients, and comes in a pack based on the Pot Noodle brand. Calorie count per 100g is 101-115kcal. Unlike Pot Noodle, Pot Rice does not include a sachet of sauce.

Pot Rice’s 2003 disappearance from shelves was the result of rationalisation by Unilever to focus on other Pot Noodle lines, The Grocer understands.

Its revival came in response to “fierce consumer demand” said the supplier. “Pot Noodle fans are always passionate about their favourite products, and a recent social media poll saw many people calling for us to bring back Pot Rice.”

Supported by a #BringBackPotRice social media push this summer, the relaunch would “enable retailers to capitalise on the fast-growing instant hot snack category” according to Andre Burger, UK VP for foods at Unilever. “Mealtimes have very much evolved from the traditional sit-down dinner,” he added.

“Lifestyles are busier than ever and eating habits are becoming more fragmented due to shifts in culture, demographics, who we live with and how we spend our time.”

The return of Pot Rice follows that of Pot Pasta, which rolled out in three variants last summer having originally been available in 1999. The rejuvenated instant pasta snack helped the larger Pot Noodle brand achieve value growth of 1.5% to £102.5m [Nielsen 52 w/e 30 December 2017].