Unilever to back NPD with its 'biggest-ever' Wall's marketing push 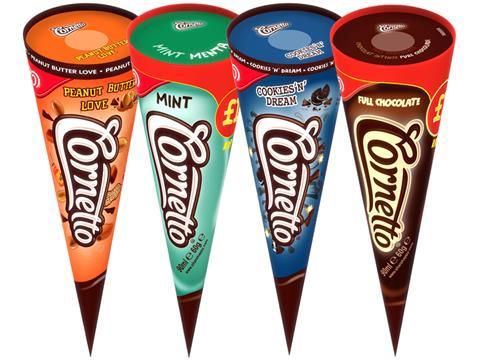 Unilever has unveiled a raft of NPD for ice cream brands including Wall’s, Cornetto and Ben & Jerry’s.

The company is replacing its existing Cornetto Premium cones with a new format featuring a chocolate disc topping. Two new flavours, Peanut Butter Crunch and Cookies ‘n’ Dream, will be available as singles for the impulse channel (rsp: £1.50) and take-home four-packs (rsp: £2.99) from March.

Following the success of strawberry and classic Cornetto price-marked packs last year, £1 PMPs are to be rolled out for chocolate and mint flavour standard Cornettos.

The activity will be supported as part of a £5m Wall’s marketing campaign - claimed to be the biggest for the brand since the 1980s.

The Wall’s Kids range is extending with Music Tornado (rsp: £1), a candyfloss-flavoured lolly with a stick featuring one of four collectible musical whistles, while Wall’s Mini Milk is being relaunched with a new recipe containing at least 36% of calcium RDA.