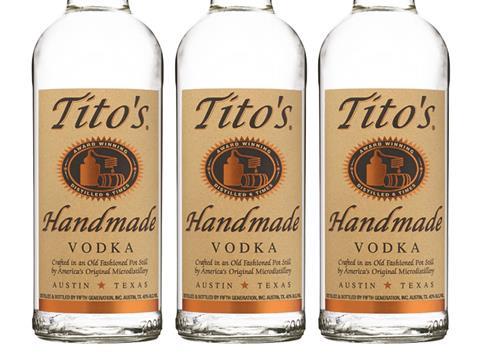 Craft spirit Tito’s Handmade Vodka - the third-bestselling vodka in the US - has secured its first UK multiple listing.

The Texan vodka (rsp: £27.50) was introduced to the UK by distributor Hi-Spirits in January 2014, and has just rolled into 15 Tesco stores in Northern Ireland.

Tito’s was founded in Austin in 1997 by Tito Beveridge, and in recent years has enjoyed phenomenal success as the US vodka market has shifted away from flavoured products and towards craft brands. It has been the fourth-bestselling vodka by value in the US over the past 52 weeks, and third in the past 26 weeks [Nielsen].

“Tito’s craft approach has an authentic feel in a vodka sector dominated by slick global brands, which is engaging consumers on both sides of the Atlantic,” said Hi-Spirits MD Dan Bolton.

“It will be interesting to see how Tito’s fares in the coming years as its size is now well beyond what many would define as craft - a problem breweries such as Sam Adams are also coming up against,” said Wisson.

“Within the UK, it could do well if it leverages its craft associations and doesn’t talk about its significant success in the US. Tito’s attractive packaging, relative affordability against super-premium vodkas, and artisan positioning could catch the eye of drinkers looking to trade up.”