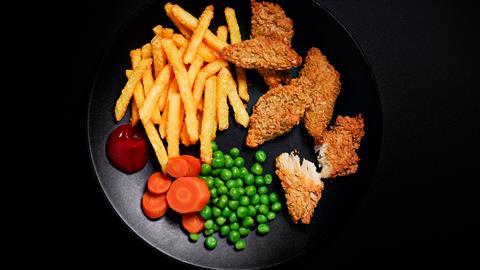 Veganuary is well and truly upon us, bringing with it swathes of new plant-based products. There are so many, in fact, that we’ve put together a second roundup of branded launches hitting shelves this month. Here are a few to look out for. 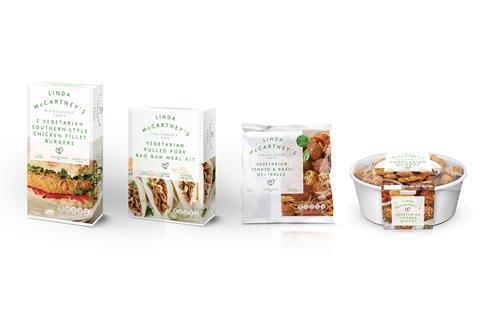 Vegetarian brand Linda McCartney’s is riding this month’s vegan wave with four new plant-based products. All in the frozen aisle, the launch kicks off with Tomato & Basil Meatballs (rsp: £2/292g) and a Southern-Style Chicken Fillet Burger (rsp: £2/270g), which went into Sainsbury’s and Ocado on 30 December. These will be followed by a Pulled Pork Bao Bun meal kit (rsp: £5/270g) and Chicken Bucket (rsp: £5/390g), coming to Tesco and Ocado from 20 January. 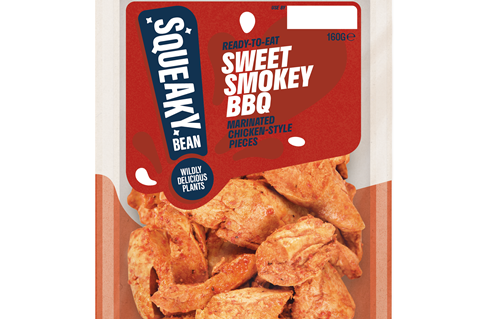 Meat alternative brand Squeaky Bean – which first launched into the UK with a line of ‘dirty vegan’ products last January – is targeting on-the-go snacking with these marinated chicken-style pieces (rsp: £2.75/160g). Made using pea and whey proteins, the ready-to-eat products are available in Sainsbury’s in BBQ and Tikka flavours. 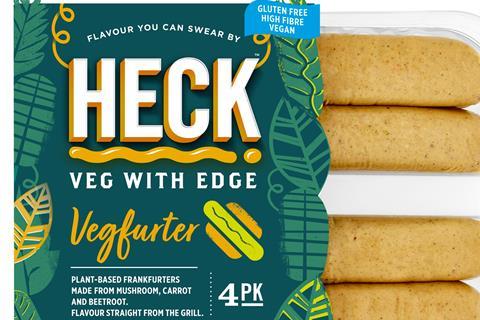 Sausage specialist Heck is marking Veganuary with two new vegan launches. The Vegfurter sausage (rsp: £2.50/320g) has just landed in 250 Sainsbury’s stores, while the Ultimate Vegan Burger (rsp: £2.50/228g) will launch into Asda from 7 January. Both products are made using mushroom and beetroot and flavoured with “a natural hint of smoke”. 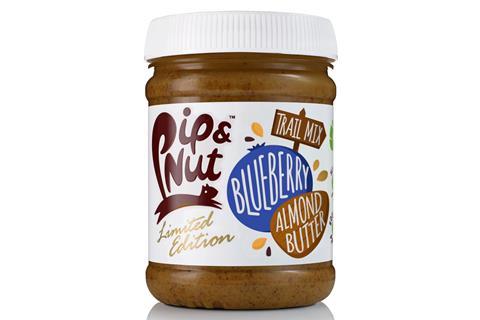 Pip & Nut is bringing trail mix, a popular American granola snack, to the UK in the form of a nut butter. Limited-edition Blueberry Trail Mix Almond Butter (rsp: £3.95/225g) is made with sunflower and pumpkin seed butters and packed with blueberries, coconut and almond nibs, the flavour is “a perfect blend of delicious trail mix ingredients”, according to the brand. It is rolling out into Sainsbury’s, Morrisons, Boots, Whole Foods, Holland & Barrett and Ocado. 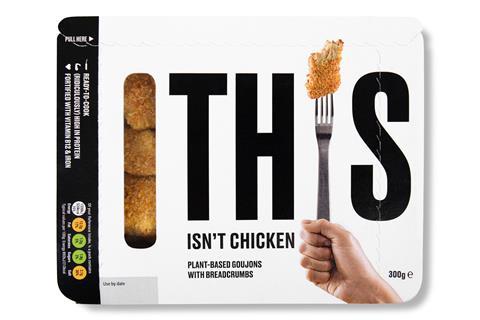 It first launched in June with a vegan bacon it claimed could “fool carnivores”. It has since collaborated with eateries such as Chilango and Crosstown Doughnuts and been listed in Holland & Barrett. Now This – which specialises in ‘hyper-realistic’ meat alternatives – has gained its first supermarket listings with Waitrose. The brand launched its range, including new breaded This Isn’t Chicken goujons (rsp: £3.85/230g), with the retailer on 30 December. 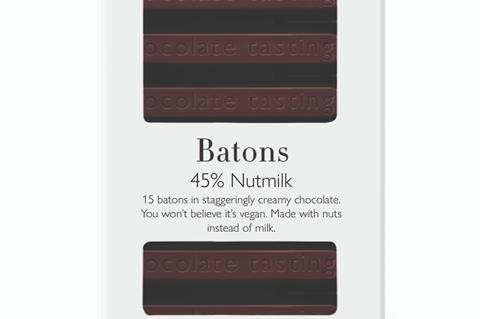 Although it has several dairy-free dark chocolate lines, Hotel Chocolat has been working on this alternative to milk chocolate for over five years. The Nutmilk Batons (rsp: £6.50) are made with finely milled hazelnut, instead of milk, and the retailer describes them as “outrageously creamy”, which made the development process “worth every obsessive second”. They went on sale in store and online on New Year’s Day. 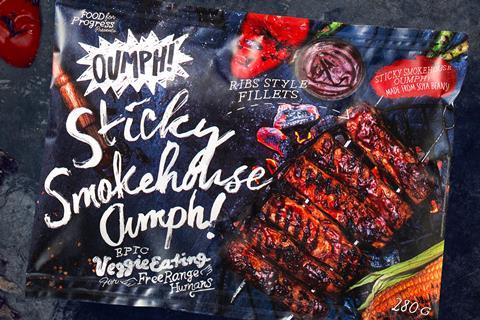 Swedish meat alternative brand Oumph made its first appearance in Tesco in March 2018 with a range of its soya protein-based products. This was followed by a frozen plant-based pizza later that year. Now the brand is increasing its offer in the supermarket with these Sticky Smokehouse fillets (rsp: £3.50/280g). Coated in a “sticky, smoky barbecue sauce”, the product is designed to replicate barbecue ribs. 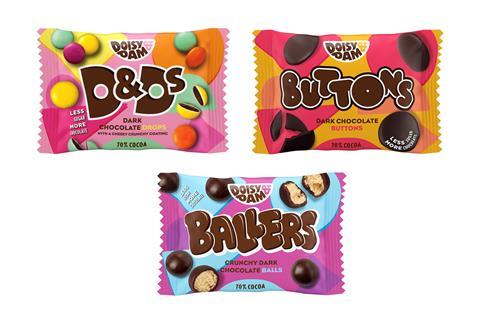 This new range of treats from Doisy & Dam may look familiar. The premium chocolate maker has put its own spin on some confectionery favourites, making them vegan and giving them “at least 30%” less sugar than the market leading products they imitate. The range features Malteser-style Ballers, dark chocolate Buttons and sugar-coated chocolate D&Ds. Rolling out to Holland & Barrett stores now in impulse (rsp: £1.35/30g) and sharing bags (rsp: £2.50/75g-80g). 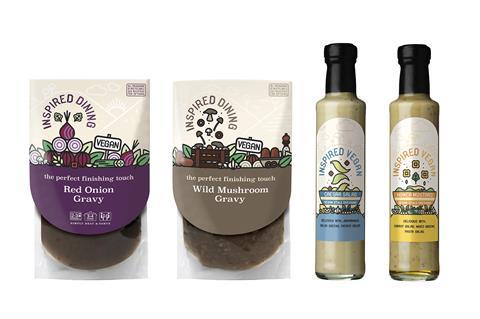 Atkins & Potts has added vegan dressings and gravies to its Inspired Dining roster. Rolling out exclusively to independents, the gravies (rsp: £2.05/200g) come in Wild Mushroom and Red Onion flavours, packaged in 100% recyclable plastic pouches. The dressings, which will be available for a limited time in Aldi, come in Vegan Style Caesar and Honea Mustard variants (rsp: £2.99/250g-265g). 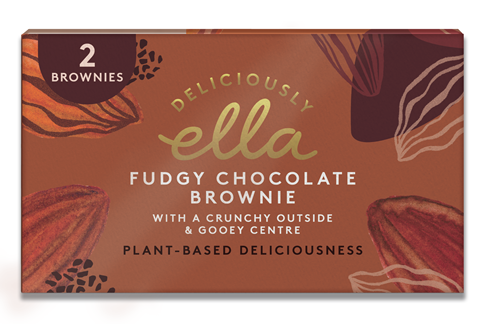 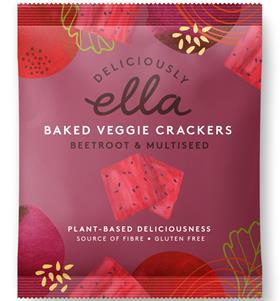 Following the launch of its Nut Butter Balls and Caramel Cups last year, Deliciously Ella is continuing to expand its grocery range with two new products this month. The first, Fudgy Chocolate Brownie (rsp: £2.99/2x85g), lands in the frozen aisles of Tesco, Whole Foods and Planet Organic this week. Each pack contains two of the desserts, which promise a “crunchy outside and gooey centre”.