Nisa names trucks after a schoolgirl and a lorry superfan 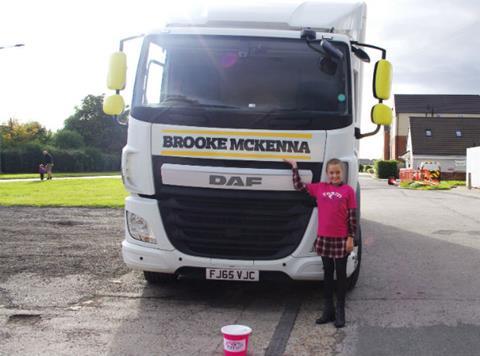 An avid lorry spotter and an 11-year-old fundraiser have become the latest winners of Nisa’s competition to name lorries after members of the community.

The symbol group has named two lorries after schoolgirl Brooke McKenna and lorry enthusiast Mark Usher, as part of its competition to name 40 lorries in its 40th anniversary year.

Brooke McKenna has raised more than £10,000 for cancer support charity Team Verrico in the space of 18 months through events including a Christmas Fayre, 5k run, bake sales, and a sponsored walk.

Her tireless efforts resulted in her being named the Scunthorpe charity’s ‘young fundraiser of the year’.

“Brooke loves fundraising and gets a real sense of enjoyment out of helping other people,” said Brooke’s mum, Rebecca, who entered her daughter into the competition.

“Brooke’s very humble about it and doesn’t ask for any recognition - she just does it to help other people, so this lorry naming will be a way of celebrating everything she’s done.”

Mark Usher became hooked on spotting trucks 22 years ago when he used to pass an Eddie Stobart depot on his daily commute to work.

“I started lorry spotting years ago, just writing down what I had seen and when and where and I guess I just never grew out of it,” said Usher.

“Having my name on the front of a lorry is just great.”

He was entered into the draw by his landlady Christine Hobbs.

“Mark is my lodger and until I met him I had no idea what a big deal lorry spotting was, especially to Mark,” she said.

“He lists lorries on his computer, arranges routes which enable him to see more lorries and prepares spreadsheets to keep track of them. I call him a complete anorak because of his hobby so I thought it would be a nice way of saying sorry to him if his name got put onto a lorry.”