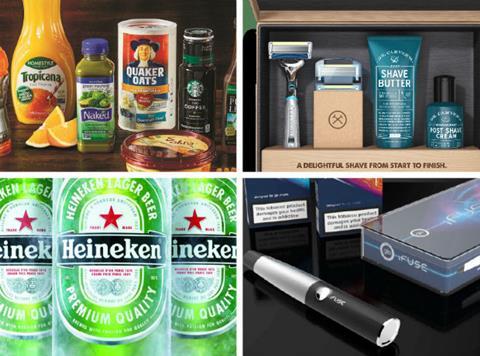 PepsiCo achieved strong top-line growth split evenly across volume and price as its investment in health and wellness continue to bear fruit. It’s in stark contrast to the wider category, which is struggling for growth and taking serious fire in the war on sugar as consumers leave fizzy drinks on the shelf for new, innovative, healthier brands. PepsiCo has taken note of the health and wellness trend, with some 45% of group sales now from “guilt-free” products after years of work to re-shape its portfolio. Indeed, Pepsi-cola now accounts for just 12% of total revenues, with products in its ‘Everyday Nutrition’ division generating 25% and ‘Guilt-Free’ another 45%.

The group also bolstered its healthy product options through acquisitions, including Kevita, a maker of fermented probiotic and kombucha drinks.

Organic growth of 4% – compared with just 0.2% growth for the food and drink category – came from traditional core products, as well as the healthier options, as domestic demand in the UK drove Frito-Lay sales of Doritos and Cheetos. A return to growth in beverages, particularly non-carbonated drinks such as sports and energy beverages, ready-to-drink tea and bottled water, helped PepsiCo outperform its peers.

The group has also pursued a premiumisation strategy, with organic versions of Gatorade, Tropicana and Naked juice launched.

Aside from launching new products, PepsiCo has focused on developing new channels and routes to market, including retail sales, foodservice partnerships and e-commerce. These partnerships were driven by active marketing campaigns such as the PepsiMoji campaign and brand activations in Disney Resort Shanghai and the Pepsi Super Bowl halftime show.

PepsiCo also managed a strong performance outside its domestic markets as the year progressed, achieving 8% growth in developing and emerging markets during the third quarter.

Unilever is under pressure to step up returns for investors, but has delivered continued strong organic growth alongside added value through judicious acquisitions like Dollar Shave Club and Dermalogica. Margin expansion is on the horizon, with further cost efficiencies planned, and shedding its declining spreads business should support organic growth as the group re-profiles in the wake of the rebuffed 3G Capital approach. Like other top performing global giants, Unilever has pursued a premiumisation strategy, launching new brands and products to grow their presence in existing categories. The consumer goods maker has been under-represented in the premium personal care market but is actively building share through promoting top end brands such as Zendium toothpaste. Sales of its premium shampoo and conditioner brand Tresemme more than doubled from 2011 to 2015 through expansion of the range, including Perfectly Undone products of foams and sprays and the Keratin Smooth collection. Unilever has also applied the formula to its food and drinks portfolio, with Pure Leaf added as a premium brand to the US tea portfolio in 2016.

Unilever’s organic growth of 3.7% is being driven by its sustainable living initiative as it focuses on its packaging, sourcing and NPD to appeal to environmentally conscious consumers. The strategy has paid off with the sustainable living brands delivering more than 60% of growth in 2016 and 40% faster than the rest of the business.

It has also capitalised on innovative routes to market in emerging markets with initiatives ranging from employing local women as rural sales agents to serve more 165,000 villages worldwide to grassroots distribution with hubs set up in larger stores in the Philippines to supply the 950,000 small convenience shops.

The Dutch brewer achieved the Global 50’s highest organic growth rate and, unlike many of its sector contemporaries in the tough alcohol market, has achieved volume growth as well as pricing. It has shifted focus from Western Europe to higher growth emerging markets via acquisitions. The latest move came earlier this year as Heinekn swooped for the struggling Kirin business in Brazil, making it the second-largest beer company in the country with a 17% share, allowing the Dutch brewer to challenge the dominance of rival AB InBev in its biggest market. The group benefitted from its geographically diverse base, with Europe, Asia and Americas all doing well. Popular marketing campaigns, such as ‘Uncage your Tiger’ in Vietnam, helped fuelled strong demand for its beers. And it managed to navigate the difficult cider market with double-digit growth across several geographies outside the UK, including South Africa, Czech Republic, Russia and Mexico.

Heineken’s strength in the premium end of the market also helped the brewer, with new products also added, including some ‘retro’ innovations in Europe, such as Bierra Morretti Regionali. Premium craft brand Lagunitas, which Heineken bought the remaining 50% stake it didn’t already own in May this year, grew at a double-digit rate in the US.

The business has also buoyed growth by remaining innovative, launching multiple new products, including Wildlagers H41 and H71 in selected markets in Europe, Heineken Light in Ireland, New Zealand, and Ivoire in Ivory Coast. It also didn’t ignore the low and non-alcoholic range end of the market, with growth achieved growth across the range, with Bintang in Asia one example of the approach. And Heineken also began distributing through new channels, including Deliveroo.

Strong top and bottom line growth was boosted at the FTSE 100 firm by the significantly devalued British pound in the wake of Brexit, but constant currency growth of 6.9% shows strong underlying performance. Tobacco was the standout category among the global 50 in 2016 with a weighted average revenue growth of 4.9% versus -0.7% for the entire list. All six tobacco players within the global 50 improved margins in 2016, while four, including BAT, of the six also grew revenues over the year. Remarkably, this has been achieved despite significant market headwinds of falling smoker numbers and increased government intervention, with cigarette volumes decreasing by about 2.5% a year over 2013 to 2016. BAT – like its rivals – has pushed up prices to compensate for lower volumes, with a shift to focus on developed markets with more attractive pricing dynamics.

BAT has also keep a tight control over its costs, while government legislation on plain packaging and restricted marketing has actually had a positive impact on operating costs for the tobacco giants, driving up profits.

Consolidation has continued steadily across the industry in recent years, with BAT snapping up Reynolds in a $49.4bn deal in January 2017 that will create the largest tobacco firm in the world.

The final piece in the puzzle for BAT – and others in the industry – has been a focus diversification through NPD in e-cigarettes and next generation products (NGP). NGPs currently make up just 1% of the global tobacco market, but the sector has grown at about 60% CAGR over the past five years and has seen significant investment from BAT in recent years. However, the sector does tend to cannibalise existing traditional cigarette usage rather than recruiting new customers.

The world’s biggest bakery has defied a structurally challenged category – with negative bread consumption trends in many developed markets – to achieve top and bottom line progress. Performance in the frozen, snacks and sweet baked goods categories, as well as growth in strategic brands, helped offset the overall challenges in bread in 2016. Artisanal products also performed well in Canada, alongside bread alternatives such as bagels, English muffins and tortillas.

Revenue growth was driven in part by the weakness of the Mexican Peso, but domestic sales in Mexico , which makes up 30% of the group total, were also up 8%. Lower raw material costs and distribution expenses, as well as supply chain efficiencies and cost control initiatives, helped overall margins at the business. Gruppo Bimbo is well-placed to drive further consolidation in the highly fragmented and localised bakery category, with growth opportunities also present through geographical expansion beyond the Americas.