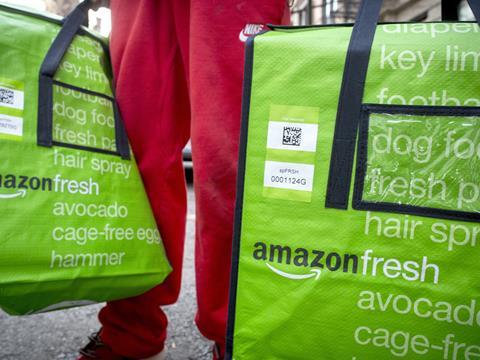 Sales of grocery items on Amazon have soared by 30% over the past year driven by growth in beverages and snacks & desserts.

Grocery sales across all UK Amazon sites reached £25m in the first quarter of 2017, representing an increase of almost £5.8m on the same period last year, according to data from One Click Retail.

The bestsellers over this period were beverages and snacks & desserts, with sales up by 30% and 5% respectively. World foods also registered high growth of 30% to become the fifth bestselling grocery category on Amazon.

Luxury food and drink entered the list of top sellers for the first time in seventh place, driven by premium chocolate and tea brands such as Godiva and English Tea Shop.

The majority of sales came from the main Amazon site, but the figures also showed rapid growth of its Prime Pantry proposition. Beverages and snacks & desserts were also the two most popular categories for this service, with respective growth of 350% and 300% on last year.

Spencer Millerberg, CEO of One Click Retail, said AmazonFresh was also growing “infinitely” but from a “tiny” base of under 5% of Amazon’s grocery sales.

Amazon was likely to continue double-digit growth in groceries in the short term, Millerberg said. “I don’t think we’ll see the same growth in 10 years but you can see it the short term. No one else out there has that level of innovation,” he told The Grocer.

“Saying that, if there’s any market in the world that can compete with Amazon right now, it’s the UK. The likes of Ocado, Asda and Tesco are doing a really good job so Amazon is really in a challenger position rather than a leader position.”