Can government deliver an 'Amazon tax'? Is it needed? 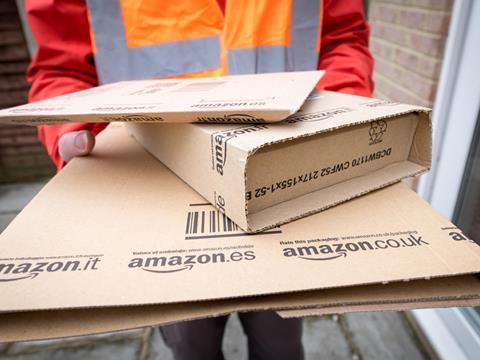 Almost three years ago, an investigation by The Grocer revealed the £10m business rates bill paid by Amazon - against annual turnover exceeding £5bn - worked out the same as the combined bill of 15 small supermarkets.

Now, after a barrage of headlines, chancellor Philip Hammond has declared the UK government is drawing up plans for a so-called ‘Amazon tax’, even if talks for an international solution flounder.

But would the UK government really be wise to target online companies? And what would its impact be on our burgeoning online retail sector?

Hammond’s intervention came last week as House of Fraser became the latest retailer to go into administration. In an interview with Sky News, he said: “We want to ensure the high street remains resilient, and also make sure that taxation is fair between businesses doing business the traditional way, and those doing business online. If we can’t get international agreement to do this we may have to look at temporary tax measures to rebalance the playing field.”

Last month, research by rates specialist Altus Group found Amazon paid only £33m in business rates last year, despite the revaluations and expansion since 2015, on sales of nearly £9bn. Yet House of Fraser’s 59 outlets faced a similar bill, with total sales of £787m.

Sources at the Treasury say Hammond’s latest intervention is “nothing new”, pointing to a position paper published last autumn and reiterated in the Spring Statement, in which it said it was pushing for ‘reform of the international tax framework, to reflect the value created by users for certain digital business models’.

Yet pushed further on what it actually plans to do, it emerged there is “no timeframe” and precious little detail to go with those ambitious statements.

Ministers have failed to publish any responses to the position paper, which The Grocer has learnt attracted a mixed response from trade bodies.

“We are using the position paper to inform the discussions in this area, but it’s not a traditional consultation. No timeframe and I’m afraid I can’t speculate beyond that,” says the Treasury source.

In March, chief secretary to the Treasury Liz Truss said a “turnover tax” was one option, with others including an online tax or even VAT reform.

But what ministers really want, ironically given Brexit, is harmony with the EU and world governments on how to tackle the issue. In March, the European Commission proposed a 3% tax on revenues from Amazon, Apple, Facebook, Google and other companies with total annual worldwide revenues of €750m and EU revenues of €50m.

At the time its impact assessment suggested about 150 of the biggest online platforms could be brought under the tax, with estimates that it could raise as much as €5bn per year.

Yet the EU plans face opposition from the likes of Sweden, Luxembourg and Ireland.

Meanwhile, talks at G20 level appear even further off any sort of agreement. Last month, European representatives calling for progress on the issue faced opposition from their US counterparts and the result was a vague commitment to address the impacts of the shift to a digital economy on the international tax system by 2020.

Would a tax find support?

Yet the government faces problems much closer to home when it comes to coming up with a credible new tax.

It is true that a raft of leading retail figures have called for action to redress the balance, most recently Tesco CEO Dave Lewis, who claimed the uneven playing field was a “large part” of the recent high street closures. While not revealing details, Lewis has admitted proposing changes to the tax system to the government.

Yet industry sources point out that the Tesco boss has carefully not put his name to direct calls for a new tax on online companies. Given the online operations at Tesco, and many other ‘traditional’ retailers, this is perhaps not surprising.

The BRC is steadfastly against an Amazon tax and has responded to the Treasury’s position statement strongly urging against such a move. “We have been saying for years that the rates burden on retailers is fundamentally unfair,” says BRC director of business and regulation Tom Ironside. “However, that does not mean we want to see the existing imbalance simply redistributed … and to a sector which is an increasingly important part of the retail industry.”

Andy Mulcahy, strategy and insight director at online retail association IMRG, says: “Reviewing the tax system will not sort out the downturn on the high street. That is being driven by social and technological change. Do they really think they can tax people into returning to the high street?”

Others believe a raid on Amazon’s profits is well overdue. “This has been an area crying out for action for years,” says a source. “How many retailers does the government want to see go out of business before it does something? What we need is a system that targets the large, pure play online companies. The money has to be ring-fenced to be reinvested in high streets or in reducing the rates burden on bricks and mortar companies.”

“The government has to be very careful about how it introduces any tax,” agrees Clive Black, analyst at Shore Capital. “It would be a calamity if small, innovative online companies ended up being overtaxed. But I do think these revelations about Amazon’s meagre tax rates are a turning point.

“Amazon is a part of a cabal of organisations that are completely out of touch with reality. They are arrogant and stupid if they think this is not going to catch up with them.”

With Amazon in danger of being demonised, it appears there is finally some momentum behind a rebalance of the business rates system. Whether the retail industry will actually welcome action when it comes is another matter.