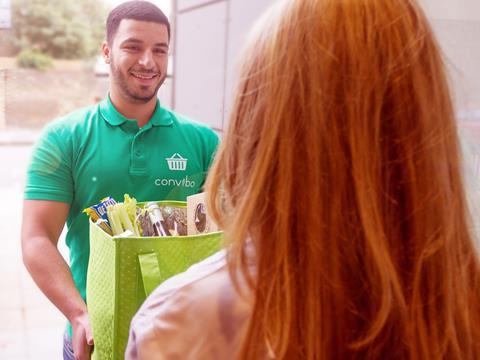 One-hour grocery delivery service Convibo is changing its name to Homerun as it sets its sights on being “faster and cheaper” than Amazon.

He forecast one-hour delivery would be the norm in two to three years’ time and warned supermarkets would lose out to Amazon if they failed to understand their customers.

“They [Amazon] have done this in the past and have entered other industries and they quite frankly destroy the competition,” he said.

“Not because the competition was not good enough, but because they weren’t paying enough attention. By the time Amazon was there it was really hard to reach them, and they are still struggling. But it’s really about keeping your customers. The customers want this, let’s offer this to them in the best way possible so that we will both benefit, and let’s keep our share.”

Its range has today been expanded through a deal with Booths that will see the supermarket’s products being offered to customers in London and the south east for the first time in its history.

Convibo currently offers fast-track deliveries in 16 London postcodes from M&S, Tesco, Waitrose and Whole Foods for a fee of £4.99.

Malavetas argued that “if you have focus and scale you can win”.

“Amazon definitely has the scale, they have everything,” he added. “But what the major supermarkets have is an incredible outlay of stores. They have them everywhere, they understand how to build the store, they understand what to offer to the customers in a specific catchment area, so we are really coming here to act as a layer on top of everything.

“We are focused on groceries, we have the operational excellence as we are doing this for more than one supermarket - four at the moment. We do understand the customers in a different way, because we only deliver groceries in one hour so it’s quite different behaviours,” he said. “And we can have the scalability because we are using the stores and we change completely the way we are shopping from the stores and transforming them into Google fulfilment centres. So if we can have the focus and if we can have the scale, trust me, we will be bigger, faster, and cheaper than Amazon and everyone can keep their customers.”