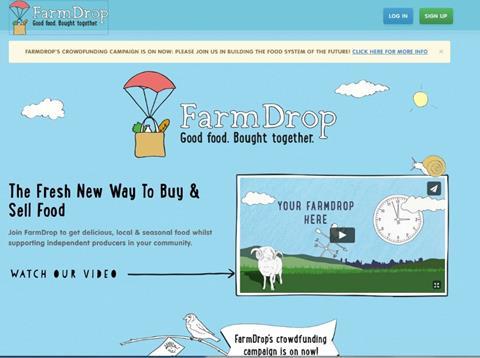 The CrowdCube equity fundraising campaign secured investment of more than £400,000 from 190 people in just eight days making it one of the most successful of all time in the UK, according to FarmDrop founders who have decided to keep the campaign open.

At the time of writing there were 48 days left to pledge an investment although co-founder Ben Pugh confirmed the project was likely to close far sooner than that.

“Everything is moving far faster than we thought it would be,” Pugh told The Grocer. “We want to make sure everybody who’s interested has enough time to make a considered decision but we also want to focus on executing the business plan, and closing the investment round sooner rather than later will help us do that.”

FarmDrop launched in April 2013 to enable shoppers to order food from a range of local suppliers and collect it at a single ‘hub’ location once a week. Currently there are five active FarmDrops in London and the South East but Pugh, who launched the business with Ben Patten in April 2013, hopes to boost numbers to 400 around the UK by June 2017.

The operation enables suppliers to keep 80% of the retail price of their goods, rather than the 50% they might make through traditional retailers and wholesalers, according to Pugh.

Asos co-founder Quentin Griffiths and Brett Akker, co- founder of car-sharing group Streetcar, are among those who have invested.