Fresh and chilled brands a growing force in online 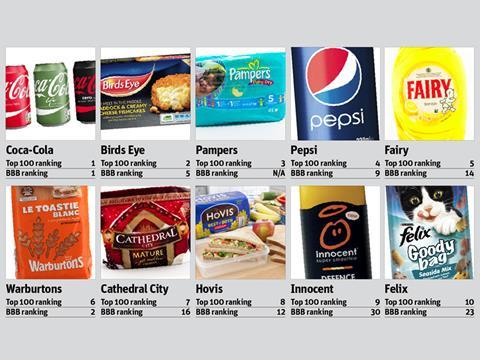 It’s no real surprise. Coca-Cola is the biggest online grocery brand in the UK, according to a new report from CheckoutSmart. Coke took £1.06 of every £100 spent on grocery by e-commerce shoppers over the past 12 months, an increase of 9p, or 9.3% on last year.

Coca-Cola fits the bill for the classic online grocery purchase: it’s heavy and bulky, making it a pain to carry around. It’s the same deal with Pampers, which sits at number three, and Pepsi, which climbed five places to number four.

So far, so predictable, but the ranking (based on online grocery purchases made from 12 May 2014 to 10 May 2015) also highlights an important emerging trend: while there have been obvious differences in the past, an online shopping basket in 2015 is evolving into a typical in-store basket.

“Online is the new normal,” says Chris Howarth, founder and general manager of CheckoutSmart and author of the report. “We are seeing a closer alignment between in-store and online as online penetration increases and the online shopper becomes more of a general shopper. The brands and the departments moving up the list are making it much more representative of a normal grocery shop and in two years I think it will be indistinguishable from an in-store shop.”

Almost a third of the top 100 are from the butter, yoghurt, cheese, bakery, milk, fresh and frozen categories - rather than historical online favourites like household, ambient or petfood - a fact that will surely not be lost on Amazon and its nascent Amazon Fresh supply base.

Online grocery shoppers “aren’t just large family, baby-carrying pet owners anymore,” adds Howarth. “Now you’ve got the typical everyday shopper allocating greater spend online. If you looked at the data two years ago [when CheckoutSmart first started its service] and compared a typical online basket to a typical in-store trolley they would be very different in terms of brands and pack sizes. A year ago the same shoppers may have only used online tactically, for things they didn’t want to carry or transport themselves, but the gap is narrowing. And for many brands that haven’t yet realised their full potential online that is a huge advantage.”

As a result, he says manufacturers are now thinking about the online channel “more consistently”. “A lot of the top fmcgs that had big bulky products, and therefore had a natural affinity for online, put e-commerce teams in place early. What we see now is those structures maturing, so a lot of the core grocery brands are now equipped with a commercial and marketing team that is increasingly able to take advantage of online. And there has been a tremendous catch-up by brands that don’t have a natural affinity for online taking place. Brands are really raising their game.”

According to Kantar Worldpanel, for the 12 weeks to 21 June 2015, supermarkets are going in reverse, with spend down 3.3%. The convenience sector - considered to be booming - grew just 0.3%. The discounters, no strangers to growth, are up 7.7%. But online is up by 15%, growing almost twice as fast as the discounters.

“It is clear that shoppers are choosing to move huge sums of money out of big box retailers into the discount and online channels,” says Fraser McKevitt, head of retail and consumer insight at Kantar Worldpanel, adding that while discounter growth has been on an inevitable slowdown from the heady heights of 2013 and 2014, online grocery is still moving upwards.

That’s partly because, as the top 100 makes clear, new and existing brands are shaping themselves to take advantage of online, but also because brands that have long enjoyed the potential offered by online, like the baby category, are still booming.

“That wave is still going,” says Howarth. “It becomes self-perpetuating.”

Some of the biggest climbers in the UK top 100 are from the baby category, as more and more young parents discover the joys of having someone else do the grocery shop while they desperately try and catch up on sleep at any available opportunity.

Julian Highley, global director of customer knowledge at Dunnhumby, analysed the online shopping habits of seven million people in 14 countries and says the baby category is crucial to the growth of online grocery shopping across the globe, where emerging markets like China and Poland, and new markets, like Thailand and Brazil, experienced 97% and 89% year-on-year growth respectively.

“Babyfood and care products not only appear in the top three categories, these are clearly important gateway products for new online shoppers,” he says.

There is “no doubt online will continue to be the fastest growing channel in grocery,” believes Howarth. “Early adopters are broadening their requirements and spending more. You have a new set of shoppers that are typical grocery shoppers, and you still have a massive group that hasn’t yet embraced online. So there is a huge amount of growth still to come.”

And, naturally, as well as brands and consumers, retailers will accelerate that growth too.

“The supermarkets are dedicating more resource and store space to online,” he adds. “And they need to utilise and leverage it hard. Ocado’s share price is built on that, Tesco.com is built on pushing more orders through.

“So everyone from brand to retailer to consumer is aligned to grow the online channel. If you look at UK grocery, today online stands at around 6% of sales. I’d be surprised if it wasn’t 10% by 2020.”