Hubbub to close in face of tough competition 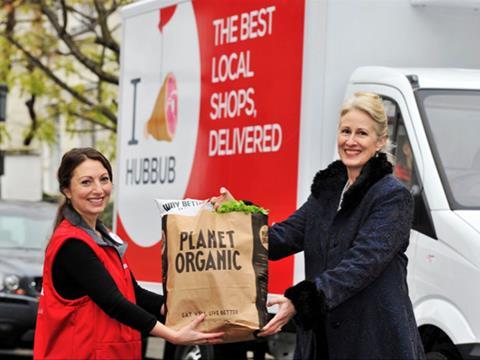 Online marketplace and delivery service Hubbub is closing down nine years after making its first delivery.

The service, set up to deliver produce from independent traders to London customers’ doors in one-hour slots, will complete its final orders today.

Hubbub said its last day of trading was proving “really busy” and that it would “go out with a bang”.

CEO and former human rights barrister Marisa Leaf, who founded the company in 2008, said this was the first week the business had become “completely profitable” but that it was proving too difficult to compete with the larger online and bricks-and-mortar supermarkets.

“Wherever you look, you get advertising from the big supermarkets so for a smaller independent to cut through is almost impossible,” she said.

“The likes of Amazon Fresh and Ocado get a huge amount of airspace and for a startup to be able to compete, you’ve got to have an awful lot of money to spend on marketing. Amazon Fresh doesn’t even need to make money so in a way were trying to compete with something that wasn’t real.”

Amazon Fresh launched in London last year with a similar focus on delivering produce from independent shops. But Leaf said the launch hadn’t affected her business “at all” and she wasn’t aware of any customers or suppliers defecting to the Amazon offer.

“The only thing it might have impacted was that our funding deal fell through in summer but that was around Brexit and and a lot of uncertainty, so I don’t know if that was the case,” said Leaf.

Leaf began the business using her Mini to deliver produce from two independent shops to her local area. The idea was to offer “the convenience of the supermarkets with the provenance, variety and service offered by my trusted local shops”.

The business grew substantially with the appointment of co-CEO William Reeve in 2014 to include 10 delivery vans, more than 100 independent shops and more than 15,000 products.