Inside Amazon's Tilbury FC: is the controversy justified? 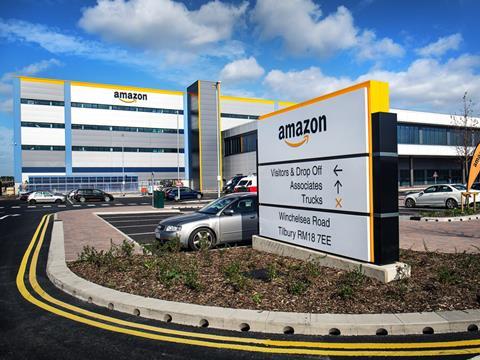 It’s the place where, according to headlines, toilet breaks are timed and exhausted workers sleep standing up.

But since 2015 Amazon has been giving the public tours of its UK fulfilment centres.

Five of 17 UK Amazon FCs now offer tours, including Tilbury in Essex, which is a year old. Along with Manchester, it’s one of the first robotic Amazon FCs to do so. It began opening its doors to public scrutiny this spring, months after a damning Sunday Mirror undercover investigation at the site.

Is there a connection? Depends who you talk to. “We started to think it was the right thing to do to invite you in,” says one spokeman, on a tour set aside for journalists.

“We were doing this before [the exposés],” says another. “We wanted people to see for themselves our work environment and how we fulfil orders.”

So, what’s the setup?

First surprise: nothing can be in the wrong place because nothing has a right place.

On arrival, products are inspected and barcoded. “And the Amazon system knows they are here,” says our guide.

They are moved in totes on conveyor belts to workers who must take each item and place it on a tall, mobile shelving unit, brought to them by a 10-inch-tall robot. The products go wherever there is space. “All the items are stored randomly, so thousands of a particular phone case could be in thousands of locations.” Because the worker, or “stower”, scans each product’s barcode followed by one on the shelf, the system knows where it is. The lowest shelves are close to the ground while the highest require steps. The largest items are 18 inches wide, with bigger products dealt with at other FCs.

Once ordered, products are brought on the same four-sided shelving units by the same robots to human pickers. Multiple pickers could process items in a single customer’s order, but the robots - called “drives” - recognise when several items on a single picker’s workflow happen to be on the same shelving unit, called a “pod”, and bring that pod. The items are scanned, put into totes, and whisked away on more conveyor belts 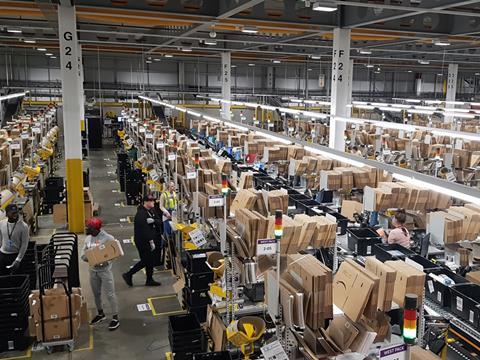 By now the items are sorted by customer, in a mysterious process not fully explained (“Don’t take pictures here. It’s patented”). The packers scan each item, a computer tells them what size box to use and a tape machine dishes out the exact length needed. There is still no address on the box - no one sees what’s going where.

The packed boxes go back on a conveyor to waiting lorries, and a machine applies the address en route.

Unlike at Ocado’s automated Andover CFC, there’s no evidence of robot pickers. Could they come? “We wouldn’t talk about that.” The robot drives move constantly behind a metal fence “like a Tetris game”, bringing pods to the gaps where staff are working. The drives have integral cameras and navigate using QR codes on the floor.

The machine that applies addresses also weighs packages and sends any that aren’t right down a shoot for inspection.

But the FC itself is the most complex machine at work here - the “Amazon system” and its minimisation of error potential.

That’s partly down to limiting human duties. This is highly repetitive work, in which there is no evident way to excel other than by being faster. Our guide says there are no minimum targets, but it’s clear performance is constantly monitored, in a system where everything is tacked.

It also makes it difficult for anything to go missing, but workers nevertheless walk through ‘search lane’ scanners as they leave. This is a factory - one where the product is sending customers their orders - and not one bereft of benefits. There’s a “career choice programme” in which employees are offered 95% funding for a nationally recognised course, up to £8,000 over four years.

The workers seem to have time to share a joke.

Of course we can’t know how well this image matches daily reality. But at least by opening the doors, Amazon gives the public (4,500 so far in the UK) an opportunity to judge for itself.