Mukbang: what on earth is social eating? 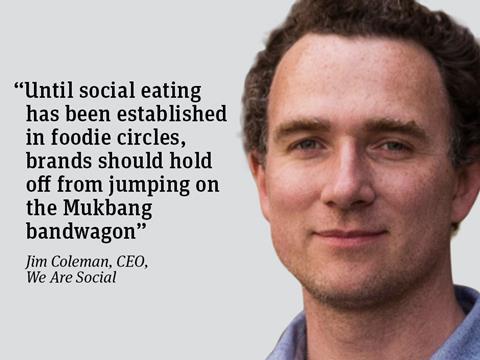 It’s big in Korea - but what about the UK? After all, we’ve been embracing a wider voyeurism for some time, from social networks like Periscope and Talkshow to The Guardian streaming the Google Glass-enhanced Watch Me Date series. Our appetite for witnessing other people’s most intimate moments is showing no sign of slowing down.

Game streaming platform Twitch has been among the first to try to capitalise on the trend. Earlier this month it launched its own social eating beta category, which users are required to tag if they take a break from gaming and stream themselves eating a sandwich. It’s had a rocky start. The users are game focused, not food focused. The few streams that have gone up feature gamers picking at depressing-looking al desko meals including pre-chopped supermarket crudités, bananas or bowls of soup, all while staring absentmindedly at their computer screens. One unfortunate individual streamed himself throwing up. It’s a far cry from the tasty morsels demolished by The Diva and her pals in Korea. To try to raise the tone, Twitch has uploaded a bizarre list of banned social eating substances including junk food, alcohol, petfood, toxic substances or bodily fluids. But this has not stopped users from hitting back at the move, posting YouTube videos have criticising the platform for jumping on a bandwagon they see as irrelevant.

So what’s going wrong? After all, we love food on social media. Food is one of Instagram’s most popular topics, and plenty of us follow YouTube recipes to perfect our dinners at home. But the vast majority of images and videos are scant on people actually eating. Even hugely popular foodie channels like Deliciously Ella and Sorted Food show an awful lot of stylised shots of cooking and perfected dishes - but minimal shots of anyone actually consuming them. On social, we fetishise the food itself - eating it is a distant second.

In South Korea, eating is traditionally a very social activity. In a modernised world, where increasing numbers of young people live and eat alone, Mukbang offers a new way to share the eating experience. While Western living patterns have also changed over the last few decades, young people in British cities typically share flats or houses, rather than moving into tiny studios on their own.

One thing Brits do have in common with Mukbang’s biggest fans is an obsession with what we eat. Park Seo-Yeon says her followers are often on diets, so get a vicarious thrill from watching someone else stuffing their face. And there are plenty of English comments under the Diva’s YouTube posts from dieters or fasters.

So could Mukbang take off here? Possibly. There may come a day where we get tired of pictures of avocado toast and want to see someone actually eating it. But until eating on social media has been established in truly foodie circles, British brands should hold off from jumping on the Mukbang bandwagon.

Jim Coleman is CEO of We Are Social