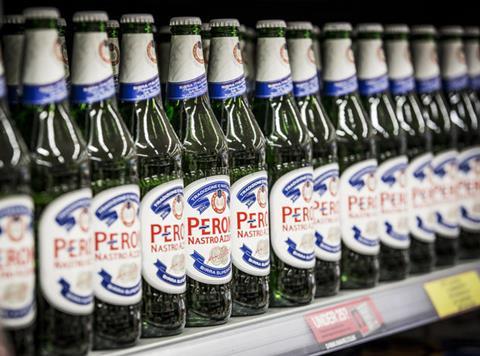 Ocado has partnered with Peroni to launch a physical button that will place a pack of beer in your online shopping basket with one press.

The Amazon Dash-like device is designed to hang on the fridge and eliminates the need to log on to Ocado.com to order Peroni.

Unlike Dash, the button will not send the Peroni automatically to your door. Instead, the 100 Ocado customers trialling the device will find the beer in their online baskets when they next log in to Ocado, ready to be delivered with their next order.

Ocado played no part in creating the technology, which runs via an iPhone app and was developed by Peroni.

But it nonetheless represents the online retailer’s first foray into the internet of things arena.

Ocado launched a barcode scanning app in 2014, but has yet to launch its own brand of internet of things devices.

The retailer is looking into this technology, though, as confirmed by chief technology officer Paul Clarke last month. Although Clarke would not reveal the nature of its ideas, he said they went “beyond what we see people doing at the moment” and could use voice recognition technology as this was “a hugely important part of how people shop”.

Since its launch into the grocery market, Amazon has created a number of physical devices that link consumers to its site such as the Amazon Dash button and the Amazon Dash wand, which enables users to place an order by scanning barcodes or speaking into a microphone.