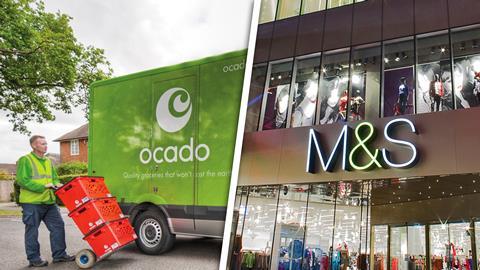 The announcement, finally, of Ocado and M&S’s deal this morning will have dumbfounded some analysts.

Just a few weeks ago, when reports of the deal first emerged in the press, most seemed to agree that M&S products could not and would not replace Waitrose’s in Ocado’s offering.

And yet that is exactly what is happening. The deal will see M&S pay £750m to take 50% of Ocado’s UK retail business under a new joint venture, and supply roughly 10% of the online supermarket’s range.

It will also see it replacing existing Ocado supplier Waitrose from September 2020.

Among the various questions faced by M&S CEO Steve Rowe in a press conference following the announcement was the blunt but pertinent: what have you actually bought? Some Waitrose customers?

Rowe said he was very clear that, in gaining half of Ocado’s UK retail operation, M&S was “buying a scaled food businesses that is profitable and sustainable”.

But both retailers are banking on Ocado’s Waitrose shoppers not simply abandoning the site.

Ocado CEO Tim Steiner said that about 35% of the online retailer’s sales were own label, including 10% which were Ocado products and 25% which were Waitrose. A quarter of Ocado’s sales is a big gap for M&S to fill.

Rowe claimed M&S was 4% cheaper than Waitrose on a basket of 3,000 comparable products, so customers would “get a fantastic deal to get our products at better prices”.

Ocado had done a “bunch of consumer research around different brands and M&S clearly came out the favourite”.

“I’m getting messages from customers saying, please do it.”

His other argument was that Ocado’s customers “have been unbelievably loyal to us for a long time”.

It’s customer loyalty that the deal will test. Without it, Ocado could lose not just sales of Waitrose products, but all the customers who use the site because those products are there.

“Ocado’s decision to partner with M&S is going to reveal a lot about the e-commerce retailer’s existing customer base,” says Fraser McKevitt, head of retail and consumer insight at Kantar Worldpanel. Namely, “how many Ocado shoppers are currently there for the Waitrose products and how many for the delivery service?”