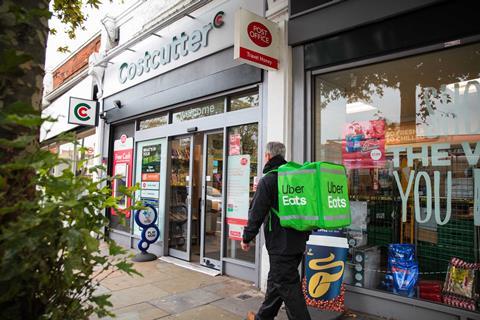 Alcoholic drinks, ‘meal for tonight’ options and essentials such as milk will all be available for delivery

Retailers within the symbol group, which operate under the Costcutter, Mace, Simply Fresh, Kwiksave and Supershop banners, will be able to sign up to Uber Eats through the Costcutter Supermarkets Group (CSG), following a trial in stores across London and the south east.

A range of products will be available for delivery on the app, including everyday essentials such as milk, butter and bread, ‘meal for tonight’ options, soft and alcoholic drinks and sweet treats.

Costcutter marketing director Sean Russell said: “With 28% of food and groceries now purchased online in the UK, our partnership with Uber Eats is a great way to reach new customers and demonstrates our continued commitment to helping our independent retailers thrive.

“We’ve responded to strong demand for real-time delivery and taken the lead in the convenience sector to give our retailers another point of difference in a highly competitive sector.”

CSG retailers can sign up to the platform from today (23 October), with a series of regional roadshows to be held across the country in the coming weeks to demonstrate the app.

Uber Eats added that retailers participating in its trial benefited from an average £1,500 added to their monthly retail sales. Using CSG’s Shopper First dashboard, which gives retailers insights into local shopper behaviour, the range offered on the Uber Eats app can be tailored to meet demand.

The Grocer revealed last week that Deliveroo had begun serving 200 independent and symbol convenience stores in London, including around 15 under the Costcutter fascia.