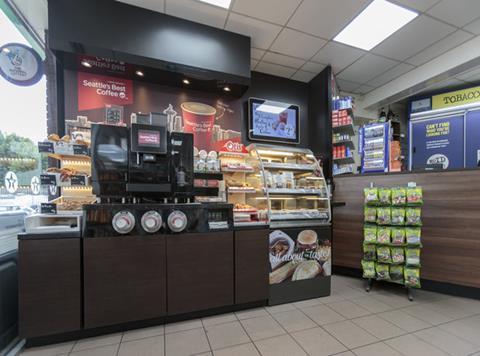 So far 45 Starbucks machines have been installed, and the revamp has delivered a near 50% uplift in coffee sales across its entire 49-site estate.

The group now plans to add a second machine at filling stations that have seen “considerable growth”.

“It has taken a hell of a lot of time, my time and company’s time, to organise that,” said Tandon. “What was a small project has ended up as quite a big project.”

Tandon, who joined the company 18 months ago, decided to freshen up the group’s coffee offering after seeing success in the category in Ireland.

“When I went out there I kind of thought: ‘We’re never going to be able to do what they do’,” he said. “But I thought we could spice things up and try and get somewhere near that offer.”

That has included installing new coffee counters ranging from 1.5 metres to 2.3 metres in length.

The group has also struck a new partnership deal with Aryzta Food Solutions to provide food-to-go products, such as doughnuts and pastries.

“The coffee and food-to-go is knocking out what isn’t working at the sites,” said Tandon.

In addition, Park is working with hot dog company Rollover to “offer another avenue for food to go” in eight of its sites, said Tandon, with plans to extend it into another 12 within the next year.

“We’ve really seen the benefits of it already, both through a costings and sales perspective,” said Tandon.

“We are seeing a 45% to 50% growth across the whole estate for coffee sales. In regards to food to go it’s hard to put a figure on it. A lot of sites didn’t do anything before, but we are roughly seeing £80 to £90 being spent a day at all the sites. It’s been successful, a really successful partnership with Franke and Aryzta. So far so good.”

Refits have also been carried out at five sites with another eight to 10 expected to be completed by the beginning of 2018.

Earlier this year, the group posted an 88% fall in yearly profits to £154,501, which it had attributed to investment in its services. The company said it was important to make the investment sooner rather than later given the economic uncertainty following the Brexit vote.

“What we’ve done is say that retail takes the sales through the car wash so we put the focus and onus back on them,” he said.

“This puts the responsibility on them to take care of it and treat it well so they end up making more money, and be more profitable from it.

“But time will tell whether we see continued growth in that area. The first year is always the honeymoon period, but now is the crucial time to see if it works.”