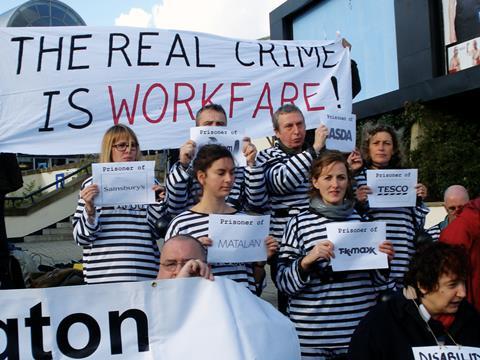 Remember Workfare? Under the Mandatory Work Activity (MWA) scheme more commonly (and some would say ironically) dubbed ‘Workfare’, over 100,000 jobseekers were ordered to work in supermarkets (and a host of other businesses) without pay to keep receiving their benefits.

Designed to help jobseekers find work by handing them the chance to gain skills, work experience and a job interview, the introduction of the MWA in 2011 was met by fierce critics who branded it slave labour.

Hyperbolic, perhaps, but they also had plenty of unhappy feedback from those sent on MWA placements, which suggested the main objective of the scheme, to help people on benefits get a job, was fatally flawed.

“I personally know a 56-year-old man who worked at Tesco for 40 hrs a week for no pay,” read one comment under a Guardian article in 2012.

“He was given the worst job, constantly filling freezers, in the hope he would be taken on. After six weeks the manager asked him if he would like to stay on. My friend asked ‘With pay?’ The manager said why would he pay him when he could pick up the phone and get more unemployed people who have to work for nothing or lose all benefits for up to three years.”

It’s anecdotal (and contested) evidence. But there was enough of it to create a blizzard of negative headlines and public protests. Tesco urged the government to have a rethink after one of its stores in Westminster was besieged by angry protesters and forced to close. “Big chains like Tesco and Asda continue to profit from forced unpaid work in their stores,” said Boycott Workfare, which sprang up in 2010. “A company that counts profits in the billions can pay people working in its stores.”

On Monday, after a four-year legal wrangle, the DWP released a list of 534 companies that participated in the controversial Mandatory Work Activity scheme between July 2011 and January 2012. Supermarkets on the list included:

Tesco and Asda quit the MWA after it hit the headlines in 2012. Sainsbury’s, Morrisons and the Co-op deny any involvement. But the DWP insists all three hosted “at least one placement”.

In 2015, the government scrapped the MWA. But the controversy hasn’t gone away for two reasons. Firstly, on Monday, following a four-year legal battle between Boycott Workfare and the DWP, a list of the 534 businesses that participated in the MWA was released.

Tesco, Sainsbury’s, Asda, Morrisons and the Co-op appear. But when asked by The Grocer this week about their involvement, responses ranged from an unwillingness to divulge the extent of their participation in Workfare to insisting they were never involved to begin with. For instance, a spokeswoman for Sainsbury’s insists it “didn’t take part”. That was already confirmed in 2012 by the then employment minister Chris Grayling on the BBC’s Today programme, where he said: “Sainsbury’s have never been part of the scheme.”

Morrisons also says: “We were not involved in the MWA scheme. We’re having conversations with DWP about why our name appeared.”

And the Co-op says: “We have not taken part in Workfare or mandatory work schemes. To our knowledge, all participants in any scheme at the Co-op were paid the full rate for their work from start to finish. We would reject being labelled a Workfare employer.”

So why have they appeared on the list? A DWP spokeswoman says “according to our records and information provided by our prime providers” all three “hosted at least one placement under the MWA”.

There is less ambiguity around the involvement of Asda and Tesco. Asked about the MWA, Asda says it had “offered voluntary work placements to people looking to develop their skills” at stores that had vacancies.

But in 2012, one job seeker told Channel 4 news he was told his benefits would be cut if he did not work at Asda for five weeks. He wasn’t offered a job at the end of the placement.

Tesco says it “left this scheme in February 2012. As a business, we remain committed to providing employment opportunities for the long-term unemployed.”

Tesco wouldn’t elaborate on whether it was still involved in other Workfare schemes - the existence of which is the second reason the controversy is back. The MWA was canned, but “Workfare definitely wasn’t scrapped in 2015” says Boycott Workfare. “Only the MWA and Community Work Placements, two schemes out of many, were scrapped.”

Different strands of Workfare, such as the Sector-Based Work Academy, continue. The SWBA hit the headlines when graduate Cait Reilly was placed on the scheme at Poundland in 2012. She sued the government for infringing her human rights and won. Boycott Workfare says the new Work and Health Programme due next year will also mean jobseekers face mandatory work or cuts in benefits.

Does the DWP think that’s a fair assessment? “We don’t use the term Workfare,” says a DWP spokeswoman. “But elements of mandatory work activity will continue. If people are claiming Jobseeker’s Allowance, there are occasions where we say you have to do certain things in exchange for benefits. For some people that means formalising some kind of work experience and giving their cv a boost.”

But a spokesman for Boycott Workfare says Workfare “isn’t an opportunity, it’s a punishment. Workfare doesn’t help people find jobs, it wastes people’s time. Workfare schemes have been shown, by the DWP’s own figures, to have no effect on whether or not people find a job. We’re delighted the organisations that have profited from the unpaid work of unemployed people are no longer protected by the DWP’s secrecy, and we encourage everyone who wants to see an end to Workfare and punitive welfare policies to use and share this information. And if Tesco and Asda continue to use it, they will find public opinion is against them, and we’ll increase the pressure on them to pull out.”

Sainsbury’s, Morrisons and the Co-op are already convinced Workfare is not for them. Tesco and Asda will have to weigh up their positions carefully.