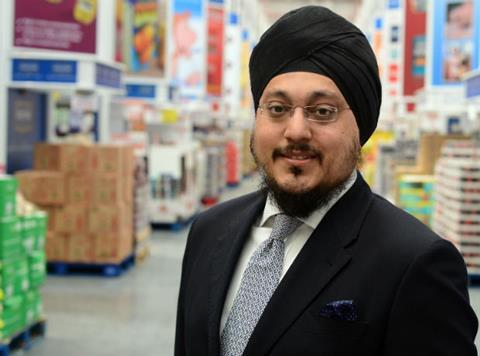 East End Foods director Dr Jason Wouhra has been awarded an OBE in the Queen’s Birthday Honours, for his services to business and international trade.

Wouhra, who began working, informally, at the company aged seven, said he was delighted to receive the honour.

“I’m incredibly surprised and humbled to receive this honour at such a young age,” he said.

“It really is amazing to be recognised in such a way and I couldn’t be more delighted. Everyone at East End Foods and Landmark is thrilled and I’ve been inundated with people sending their congratulations, which is really touching.”

He has been at the helm of the £200m-turnover Birmingham-based family business since 1998 and aspires to turn it into a £1bn global corporation.

In 2013, he brokered contracts worth more than £60,000 with hotels, pubs, and restaurants in India to supply them with Indian spices.

He is currently chairman of the Institute of Directors for the West Midlands and also chairs the Aston University Development Board, Birmingham’s Child Poverty Commission and West Midlands Police Business Crime Reduction Partnership.

He is also a non-executive director of University Hospitals Foundation Trust.

East End Foods, a member of buying group Landmark Wholesale, was started in Wolverhampton more than 40 years ago by the Wouhra family, originally from New Delhi.

In 2006, it opened one of the largest rice mills in Europe, following a £6m investment.