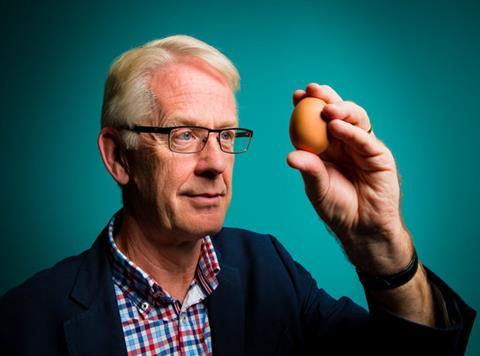 Eggs are currently enjoying the best comeback since Elvis flew to Vegas. “Twenty years ago we wouldn’t have had you here,” laughs Andrew Joret, chairman of the British Egg Industry Council. “We’d have run for the hills!”

It’s easy to laugh now. Salmonella is history, even if when Joret says ‘Edwina Currie’ her name sticks in his throat. But it’s been “put to bed. It’s been a long, slow process but the Lion mark has removed two of the biggest inhibitors to consumption in salmonella and cholesterol. And we haven’t looked back.”

To prove it he grabs a recipe book by the British Heart Foundation, which features two eggs baked in a pan with chorizo on the cover. “This tickled me, because in 2009 the BHF suggested limits on the amount of eggs we should eat because of cholesterol. Now they say there is no limit and put eggs on the cover of their own cookbook. That’s a rubberstamp.”

Lingering fears over salmonella and runny eggs were also dismissed in January, when the Advisory Committee on the Microbiological Safety of Food said eggs are “low risk” but Lion-stamped eggs are “very low risk”. That means “they can be eaten runny by vulnerable groups, which is another unlock for future consumption. Every so often you see stories about an old man in a care home prevented from eating a runny egg and soldiers. Well, that’s going to go. And it could be tremendous for us.”

The good news doesn’t end there, thanks to the ever-increasing trend for protein. “Eggs are perfect protein wrapped in relatively few calories. There isn’t a single diet that doesn’t have eggs in them.”

And there is the Great British Bake Off, which has seen the UK go cake crazy since 2010. “Actually, that hasn’t sold that many more eggs.”

Really? “Yes. We thought so initially, but we had some detailed analysis done by Kantar and their conclusion was GBBO has driven sales of ready made cakes, cake mixes and decorating kits. It’s made cake more popular but not necessarily the raw ingredients.”

Still, sales are breaking all known records. “We went from 183 eggs to 189 eggs per person per year, as single eggs or an ingredient, which is the highest rise ever. And, remember, eggs were in decline for a long time. It started before 1988, but 1988 took about 20 eggs off. That was the lowest point.”

For Joret it was the lowest point in a 40-year career. He started as a management trainee at farm business W&JB Eastwood and the “first job that came up was with eggs. I’ve stayed with them ever since.”

As a veteran, has he ever known eggs to be cheaper since caged eggs dropped to 50p for six at Asda? He “doubts it’s ever been lower. The price war means eggs are being price-matched more carefully than other products. Retailers are operating on much lower margins on eggs.”

The danger is, when retailers are squeezed they squeeze their suppliers. Does Joret worry eggs are becoming commoditised like milk, a situation that has destabilised the dairy industry?

“It’s not a healthy situation. But it won’t get as bad as dairy. The eggs sector has always been unsupported, there was never a CAP regime like there was for milk. We go bust if we get it wrong, so we have to be more in tune with the market. That’s not to say it’s not tough at the moment. It certainly is. But as an industry we are innovative. We will find ways of getting through it.”

The current price of feed will help. It’s the “single biggest cost” for egg producers. “And if you look at the commodity market for cereals and soya, those prices are relatively low. If you’re talking about producers receiving 99p for six free-range eggs, the industry can survive, but only because of where feed costs are. If they shoot up, retailers would have to change.”

Joret doesn’t look like he relishes the prospect of convincing them, but says there is “no immediate prospect” of a spike in prices that might force the issue. “Although you can’t say it’s never going to happen.”

So maybe everything isn’t so rosy in the world of eggs after all? Many say caged hens would agree. A host of US retailers recently committed to cage-free eggs, including Walmart, the biggest retailer of them all. McDonald’s did, too. So should UK retail do the same? And, as the voice of the egg industry, is it a tricky issue for the BEIC to negotiate?

“Consumer choice and clear labelling are what’s important. We have clear labelling, so you pays your money, you takes your choice. What I’ve always believed, very strongly, is whatever system of production you operate it’s your duty to look after the hens.”

Currently, caged eggs make up 51% of UK egg production. Free range takes 44% and the 5% remainder is split evenly between barn and organic eggs. It’s a massive change, considering when Joret started out in 1976 a mass-produced free-range egg didn’t exist.

“It was cages and that was it. Free range started in the early 1980s and none of us thought in 30 years it would be roughly 50/50. We just thought it would be a significant niche. Where it will end up is a good question.”

Where would he like it to end up? “We don’t have a stance on where it should be. Our view is we should produce what the market wants to buy. Those US companies have announced their intention to go cage-free but they haven’t done anything yet. The earliest deadline is 2020. Walmart is 2025. And they are moving away from a system that’s illegal in Europe. They still have conventional cages stocked more tightly than we used to, so they are going from a really low base. And I don’t think there will be a follow suit over here.”

He concedes the debate is “creating noise” but says the EU egg industry has already gone through one recent reinvestment, when battery cages were banned in 2012 to be replaced by ‘enriched colony’ cages.

Compared to ‘battery cage’, calling a slightly bigger cage an ‘enriched colony’ sounds like marketing spin, but Joret insists the industry is “trying to get across a major shift. It’s still a cage, but as well as 40% more space per bird, they have perches, nests and scratching areas. The birds use them a lot. So let the market decide and let free range quietly grow. We have the biggest free-range flock in the world, which is being driven by consumer choice. And we’d like it to continue.”

At the same time he also suggests a benefit of continuing to use caged hens to produce eggs, namely the “clear cost difference”. Today, at Asda, six free-range eggs are double the price of the 50p caged variety.

“If we are relatively well off it’s easy to think food prices aren’t important. But they are very important to some. We shouldn’t ignore that. Eggs are nutrition bombs, packed with good ingredients. To have an economical source of that is important. There is a balance in everything and when you see these enriched systems they are a big improvement. OK, the birds don’t go outside, but they can do a lot of things birds need to do.”

The RSPCA aren’t convinced. But “all of them” have been to see them. “Privately they all say they are a big improvement. But they also say they prefer free range.”

Because a free-range environment makes for a happier hen? “If you look at the science, not the emotion, everyone looks at welfare outcome indicators, like feather cover at end of lay, or lifetime mortality levels. And colony systems come out a lot better post-2012. I’m not knocking free range, but there isn’t a perfect system of looking after hens. There are different systems with different price tags attached. I am comfortable that even the most intensive system gives the animal a reasonable life. Some NGOS would disagree with that, but they would say that, wouldn’t they?”

They might say the same about the BEIC. But Joret says the “cage debate” has been “had in the EU and there wouldn’t be any willingness to go back to it. We’ve done it, tick, move on. We have more work to do, but eggs are in a pretty good place. Everything was really negative. Now everything is positive.”

Maybe not everything, but there is no doubt eggs, the UK egg industry, and 49% of hens are in a better place than they were back in the dark days of 1988. And they are moving in the right direction.

Status: Married with children and grandchildren

Brexit: I’m a stayer not a goer. When you look at international trade agreements it’s not the UK that negotiates it’s the EU. I don’t know what the government stance would be, but I don’t think it is strongly supportive of agriculture. And there is so much uncertainly on both sides.

Business mantra: Do it properly and do it well

Career high: Playing my part in turning eggs from villain to hero

Last good book: Human Universe by Professor Brian Cox. A brilliant writer and a good exponent of physics and maths

Which came first? Oh, well… I don’t know. The egg. Because without an egg you don’t get a chicken