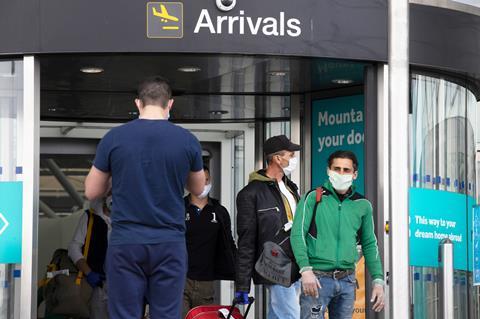 Firms had received online abuse after it emerged the sector had chartered flights from Romania to bring migrant labour into the UK, with more flights are set to arrive in coming weeks, NFU horticulture and potatoes board chair Ali Capper told The Grocer. She blamed the rhetoric around migrant labour “taking British jobs” when, in fact, British workers “haven’t wanted to do them for decades”.

More flights are expected over the coming weeks and months as fears over a seasonal labour shortage mount, despite calls for a new ‘land army’ to keep the UK’s supply chain going.

Tens of thousands of Brits have applied for fruit and veg picking roles but conversion rates are low, according to recruitment agencies - with just one in 10 Brits accepting jobs when they are offered.

Figures from the Alliance of Ethical Labour Providers - made up of Concordia, Hops and Fruitful - show there have been almost 50,000 applications from UK-based workers since mid-March, with 6,000 of interviewed for roles.

Similarly, Angus Growers - a group of 19 soft fruit farms in Scotland - has had applications from 2,714 people but has so far seen just 141 workers enter roles - a conversion rate of 5%. The firm has previously said it needs 3,000 pickers this year.

Factors contributing to drop-outs included contract length, difficulty getting to and from farms as well as a desire to only do part-time work, according to Concordia.

The requirement for workers to self-isolate for two weeks prior to starting work was also a stumbling block, said British Growers Association CEO Jack Ward.

There is an expectation the conversion rate could go up, with the government having launched a ‘Pick for Britain’ jobs website this week.

“One person I spoke to took on 30 people from a local agency and another took 20 people who’d directly applied for jobs,” added Ward.

“They were all UK nationals and the businesses said they were really good. We have to remain positive - this is a marathon, not a sprint.”

However, there are also concerns over the cost implications of hiring an inexperienced workforce.

“You’re going to be training a much higher proportion of people from scratch than you would normally,” said Capper.

“The industry is also having to introduce social distancing measures and PPE and there will be a slowdown on lines in packhouses - a whole raft of things that are going to put costs up.”

British Summer Fruits chairman Nick Marston said an inexperienced picker would be likely to have “less than a third of the productivity of an experienced one”. Costs would be “considerably higher” this year as a result, he said.

Meanwhile, Ward warned training up workers will take up “a mountain of management time” as most crops take “two to three weeks” to get to grips with.

“You’ve got to get muscle-memory and then it’s about understanding what the specification is, what to pick, what to leave, how to trim it, how to pack it. It will be difficult,” he added.

Worries have also been raised over what impact relaxing the lockdown could have on UK workers who have been furloughed from other sectors.

“Some are coming out of the construction industry and hospitality industries - as soon as those sectors reopen, they’ll want to go back to them,” warned Marston.

“You can’t afford to be overexposed to UK labour because it could disappear very quickly as the economy starts to open up again.”