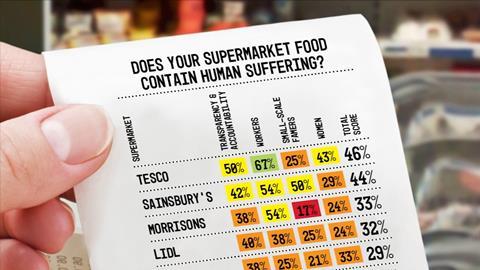 Oxfam has released its latest scorecard for human rights policies

This week Oxfam published its third annual ranking of major supermarkets on human rights – an event not all will have relished.

For the supermarket ranked bottom, it’s when it finds out it is to be the target of petitions and protests for the next 12 months, as part of Oxfam’s Behind the Barcodes campaign. But it hasn’t been an occasion on which any of the mults have been heaped with praise in the past. When first published in 2018, overall scores ranged from 23% to just 1%, and Oxfam accused supermarkets of causing “huge, hidden suffering”.

So, how have the six progressed two years on, and who is now in line for the campaign’s special attention?

Oxfam gives each supermarket a score based on its published human rights policies in four areas: transparency and accountability, workers, small-scale farmers and women. It also provides an overall percentage for each supermarket.

All have improved significantly, not only since 2018 but also since last year.

Aldi claims that award recognised policies specific to Aldi UK, while Oxfam’s focus is on the policies of parent Aldi Süd. It “doesn’t reflect the real progress Aldi UK has made or the level of our commitment to protecting the rights of workers in our supply chain,” says an Aldi spokesman.

Oxfam ethical trade manager Rachel Wilshaw says the assessment is based on the parent company but also gives “half points” where a subsidiary has made progress against the charity’s measures.

She also claims the scorecard is “broader in scope” than the award.

Aldi is not alone in slipping down. After coming third for two years, Asda is now fifth. 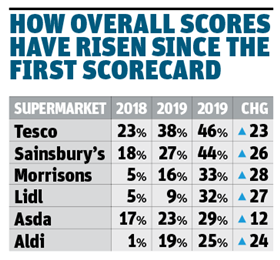 Although it has improved six percentage points since last year – like Aldi – it’s the slowest progress on the board. “It isn’t that they’ve got worse, it’s just that others have engaged on the issues we’re concerned about more,” says Wilshaw.

Meanwhile, Lidl is the most improved since last year, swapping places with Aldi and rising some 23 percentage points.

Lidl’s steps since last year have included committing to the Dhaka Principles for preventing forced labour and the UN framework on business and human rights, says Wilshaw.

Both Lidl and Morrisons have signed up to the United Nations’ Women’s Empowerment Principles. Morrisons, the most improved supermarket since the first scorecard, has also “significantly increased transparency”, says Wilshaw. “They are the only one that has published their first-tier supply chain.”

Tesco and Sainsbury’s are first and second respectively for the third year, a result of having human rights more embedded in their operations, says Wilshaw. Tesco, for example, is the only company that offers incentives to suppliers for improving labour standards.

Tesco’s 67% for protecting workers is the first score to date to go green in Oxfam’s colour-coding – but the whole board is a more positive reflection of the industry than the first, which was awash with zeros. Wilshaw notes the UK six are also the six highest scoring of the 16 on the global scorecard, which also covers the US, Germany and the Netherlands.

So, can the industry be pleased? “The overall scoring remains pretty low,” insists Wilshaw. “No company scores above 50% overall. Supermarkets still have much to do to embed human rights.

“This is about protecting the rights of those vulnerable people making our food.”