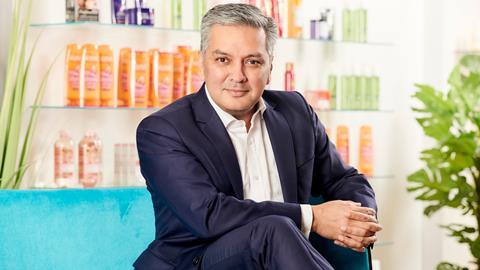 Big Interview: L’Oréal’s Vismay Sharma on the art of selling lipstick in a crisis

Times are tough for the cosmetics industry. But L’Oréal UK MD Vismay Sharma is staying positive with a focus on online, tech and sustainability

So much for the lipstick effect. In times of hardship, shoppers usually turn to cosmetics for an affordable pick-me-up. During the pandemic, the opposite has been true.

“People are at home, and not going out as often, so make-up and fragrance were bound to be impacted,” admits L’Oréal UK MD Vismay Sharma. Indeed, the beauty giant suffered a 4.8% decline in like-for-like sales in the first quarter of 2020, as make-up became less of a priority. The result was only softened by CEO Jean-Paul Agon’s assertion that L’Oréal had “outperformed” the 8% decline in the overall market.

This month has seen yet more bad news, as The Grocer reported supermarkets had slimmed down their beauty ranges. Yet similarly to the global boss, Sharma is determined to see the positives. He points to online as a success story. “Big players such as Amazon, Look Fantastic and Boots.com really exploded for us because, apart from anything else, when you have this kind of crisis people go to the brands they know well. We gained from that perspective,” he explains.

Granted, it’s Sharma’s job to put a rosy spin on disappointing sales. But the cosmetics company’s ongoing focus on digital is undeniably advantageous at a time when online shopping and tech are booming. “If we take the last 10 to 12 years, L’Oréal has responded like no other to the digital revolution,” Sharma asserts.

“We spend almost half of our media on digital and have started acquiring businesses such as ModiFace, which is the world leader in augmented reality,” he adds. “We are using that technology now to do virtual try-on for make-up so, instead of testers, you can use your phone to see what a product would look like.” Considering testers are out for the time being, it’s easy to see the benefits of such a tool.

Of course, this work had begun well before the pandemic reared its head. L’Oréal’s ongoing retail transformation efforts have seen the giant make-over numerous beauty departments across the UK, including 150 of Sainsbury’s biggest stores, to give a “premium” look and feel.

It’s all part of a bid to make the store environment more appealing to modern shoppers. “We believe very strongly that bricks and mortar retail has to be repurposed,” stresses Sharma. “It can’t just be about transactions any more, it has to be about an experience, about discovery.

“A lot of it is taking into account how consumers today operate between online and offline. When you go into a store, the consumer constantly has their phone in their hand, they’re looking online, comparing prices and looking at reviews,” Sharma says. “We want to make sure that the journey between online and offline is seamless, so you will soon see some new concepts.”

Sharma says this forward-thinking work is a sign of company culture. “L’Oréal is a very organic organisation. It’s not an industrial organisation – it’s one that responds to the environment.”

This responsive nature to challenges perhaps explains why Sharma has spent 26 years of his career at the beauty giant. He joined the Indian subsidiary when it launched in 1994, straight from college, and has since taken on roles in France, Indonesia and the UK. “The brilliant thing about L’Oréal is there’s a new challenge every day,” he says.

Sharma says he is also driven by the industry’s sense of altruism. “Beauty as a category helps consumers on a daily basis and there’s a very strong respect for the environment – not just from L’Oréal, but all of the beauty industry. There’s a sense of doing good and that gives me a lot of pleasure.”

It’s certainly a message L’Oréal is keen to communicate. Last month, it launched its L’Oréal of the Future initiative, which set ambitious sustainability goals.

These included making all L’Oréal sites carbon neutral by 2025, and ensuring 100% of the plastic used in its packaging is from recycled or bio-based sources by 2030. By that date, it is set to also reduce the greenhouse gas emissions of its finished products by 50% compared with 2016 levels.

“Rather than self-imposed goals, what we are now doing is going with science-based targets,” explains Sharma. “Our ambition is to make sure that our activities, not just the activities of the business but of our partners and our consumers, do not have an adverse impact on the environment and that the planetary boundaries are not reached.”

This science-based approach is one Sharma is keen to highlight. While L’Oréal has a clear nod to fashion, he sees the company as being far more rooted in the former discipline. “We very much believe trends are short-lived, and science is what gives consistency and real-term longevity to any business, more so in the case of beauty,” he says.

For that reason, Sharma says L’Oréal is the biggest investor in technology in the beauty industry, ploughing over 3% of its annual turnover into beauty research and innovation. It employs over 4,000 scientists in research centres all over the world to find “the next magical product”.

Not everything calls for such a scientific approach, though. There is also a more emotional aim of the L’Oréal of the Future initiative: to assign €150m (£135.5m) to address “urgent social and environmental issues”. This sum will be split equally between restoring damaged marine and forest ecosystems, financing projects linked to the circular economy and helping vulnerable women.

In essence, it’s about social responsibility in a wider sense. Arguably, that has never been more important than now, in the era of movements such as Black Lives Matter.

The movement has undoubtedly provoked some tough conversations at L’Oréal. It served as a reminder that, in 2017, the company dropped Munroe Bergdorf as a face of the brand when she posted about “the racial violence of white people” on social media. In the wake of BLM, Bergdorf is now set to join the company’s UK diversity and inclusion advisory board, after reportedly having an “open and constructive” conversation with L’Oréal Paris president Delphine Viguier-Hovasse.

L’Oréal released a statement in support of BLM, and Sharma stresses that it is a matter the company is taking seriously. He admits “a lot more has been done” in the US on this front, and the UK is catching up.

But he sees the creation of the diversity advisory board including Bergdorf as a step forward. “We think it’s very important to create an environment where our colleagues from all races, all backgrounds, all ethnicities can come in and make an impact,” Sharma says.

“But is our organisation a 100% representation of west London? No, not yet, work needs to be done. The starting point of bringing about change is acknowledging that something needs to change.”

It’s an apt way to end the interview. Because if there is one thing that characterises the turbulent market L’Oréal is playing in right now, it’s change.

Potted CV: 26 years with L’Oréal in the UK, France, India and Indonesia

Best career decision: Listening to my parents and studying as they wanted me to.

Worst career decision: I don’t think any decision taken after thinking it through is bad – you take learnings from that.

Business idol: I have two different idols: Steve Jobs because of his ability to take risks that created massive disruption, and JRD Tata, who created the Tata business empire but very importantly instilled very strong values in employees.

Business mantra: Surround yourself with people who can do their jobs better than you and then help them deliver their best.

Best piece of advice given or received: Every person has something good in them, we just have to look for it.

Hobbies: I like to travel but that’s somewhat complicated at the moment!