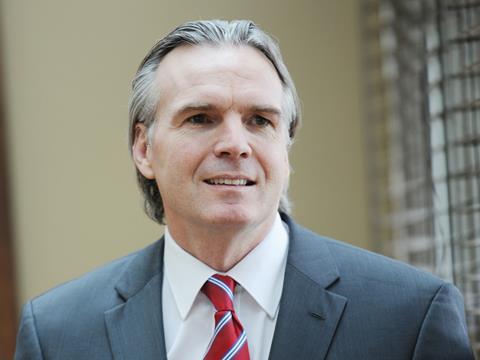 Ronald Kers is stepping up to lead the Unternehmensgruppe Theo Müller

Müller UK & Ireland CEO Ronald Kers has been promoted to take on responsibility of the entire Müller group as of next year.

He will replace Heiner Kamps as CEO of Unternehmensgruppe Theo Müller (Müller group). Kamps has been CEO since 2011 and is retiring in 2015.

In his new role, Kers will be based in Luxembourg, but will maintain his family home in the UK.

Müller will be looking to recruit a replacement MD for Müller Dairy, but there will not be a like-for-like replacement for Kers, as his role as UK & Ireland CEO will be absorbed into his new role.

Theo Müller, the sole shareholder of Unternehmensgruppe Theo Müller, said he was convinced Kers would continue to lead the group on its growth path. “I am very pleased that we can recognise and promote talent from within the organisation to this position at the top of the management board,” he added.

A spokesman for Müller UK & Ireland said Kers’s appointment highlighted the significance of UK dairy to the wider Müller group. “In turnover terms, the UK business is around a third of the whole group and in Ronald’s new role the UK will continue to benefit from his direct influence on strategic direction and culture,” he added.

“The UK business has a strong team, a sound strategy and a determination to succeed. Ronald’s new appointment is a testament to the progress that has been made, and the significant momentum will be maintained.”

Since his appointment in 2012, Kers has overseen the integration of the Wiseman business into the Müller group, orchestrated Müller’s acquisitions of the Minsterley desserts factory and Nom Dairy UK and its creation of a new buttery factory.