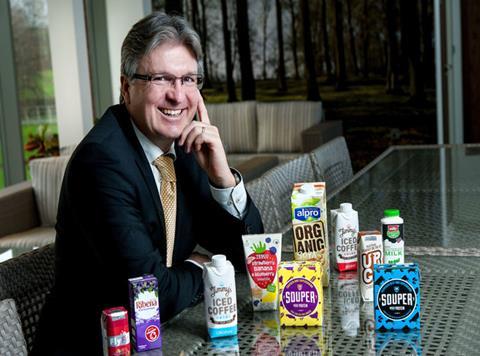 How was turning 50? Fantastic. I had a party with 40 friends from all over the world. We spent the afternoon in a pub then we had a party in the evening in the Swedish manner, where everyone makes fun of you as much as possible. Which they found very easy

Can you see yourself working outside the packaging industry? Yes. But I am enjoying myself so I have no reason to look elsewhere

Brexit - yes or no: Better for everyone if the UK stays in

Biggest packaging peeve: When you buy something small, like earplugs, but they are stamped together in plastic and you have to get the scissors out. As an industry I just think, come on…

Not least because Fageräng knows carton king Tetra Pak has “7,000 different combinations of packaging solutions but less than 5% are deployed in the UK”. And that suggests huge room for growth. But there are other reasons, he adds.

“The mess at the retail end means lots of changes are going on in the UK,” he says. “It’s a special situation. Market share was very stable for a long time. It’s not now. So all the retailers are looking at what they can do to open up opportunities.”

And it’s not just the retailers moving with the times, consumers are too. As an example, Fageräng says “24% of the UK now drinks breakfast on the go rather than at home. It’s from a small base but it’s very exciting.” And it’s “shifts in consumption patterns” like these that call for “different packaging solutions” - which is “driving opportunities for cartons”.

If Fageräng sounds optimistic about the potential for growth it’s understandable. When he joined the business in 1990, global sales were £2.5bn. Last year they hit £12bn - a rise of 380% - and Tetra Pak, now the largest food and drink packaging company in the world, sent 180 billion cartons out. It’s a journey he describes as “magnificent”. Although it’s not been without its complications.

At about the same time as Fageräng joined Tetra Pak in 1990, the green movement, gaining steam since the late 1980s, exploded. And fmcg packaging, from cartons to carrier bags, found itself a popular target.

So Tetra Pak, which started out in the 1940s, when Swedish inventor Ruben Rausing dreamed up the aseptic tetrahedron that could keep milk fresh for months without refrigeration and would make his family billions, found itself with newfound environmental responsibilities. But, in 2016 at least, only a churlish eco-zealot would claim it wasn’t attempting to live up to them.

Tetra Pak still attracts eco-critics (one well-rehearsed argument is that used Tetra Pak cartons are not recycled into new ones, ergo they are unsustainable) but it also regularly wins eco-plaudits, scooping five industry awards for sustainability in 2015 alone.

And although recycling Tetra Pak cartons is perhaps not as “simple” as Fageräng suggests (the UK business has a standalone website dedicated to explaining the process) he insists the real environmental “challenge” is the collection of cartons, not separating their seven layers of paper, plastic and ultra-thin aluminium.

“Technically we could go from box to box but recycled fibre is not as strong, so we’d have to increase the weight of the package. Environmentally that would not be smart. And because it’s not being done currently doesn’t mean we can’t do it. I think it is coming. It’s just a question of how you control the process in a good way that makes it better environmentally, not worse.”

Currently, he says “50% of all cartons in Europe get collected and recycled. In the UK we are at 25% but it’s improving every year. Progress is strong and it’s driven by ease of collection.”

As for the fate of cartons that aren’t recycled, it’s determined by the local authority. “It could be landfill, it could be incineration. We don’t control that, just as we don’t control what the individual consumer does. But we encourage as much as possible that they give it back. And we have always gone further than we needed to, from a purely legal perspective, in order to work with the environment. We focus on ensuring the systems are there to receive the cartons and we try and influence governments to collect them. It is one of our main USPs, and it’s up to us to sell it. And [in the past] we might not have been that good at it.”

The latest innovation, Tetra Rex, gives him the perfect opportunity to sell the message harder. Introduced in 2015, and made of a combination of card and sugar cane, it’s the world’s “first fully renewable” package.

“To deliver it into the market is fantastic and it sets the pace for what’s going to come for all cartons. We have full control of where the fibres come from, every tree we cut down is replanted and we have invested with people (Brazilian chemical company Braskem) that have made a plastic variant from sugar cane instead of oil. There are lots of benefits and the environmental impact compared to other packaging is fantastic. It’s in Scandinavia, the Netherlands, and slowly coming into the remaining parts of Europe.”

Fageräng is also excited by last summer’s launch of “sterilisation by electron beam”, which sterilises packaging “very quickly, so our machines go from 24,000 to 40,000 packages an hour. That gives a 20% reduction in product cost. Everyone is looking for a way to save money. Here it is.” On the subject of money, Fageräng also insists, in relaxed and convincing fashion, the most recently published accounts for his UK operation on Companies House (sales down 22%, operating profit down 28%) don’t paint a true picture of performance.

“We are a privately held company,” he shrugs. “If you take purely what we publish, it’s not what I’m looking at. What you are seeing is based on where we sell the package to the end customer, so what you don’t see is that an international customer with a plant in the UK producing for a UK customer might take their material from another market for different reasons. I am looking at a black number. So I’m pleased.”

Still, he’s not altogether satisfied. “When I compare the penetration we have in the UK to other markets, it’s very low,” he says. “Our portfolio is not well known enough. So we have got to get out there and show them what we’ve got.”