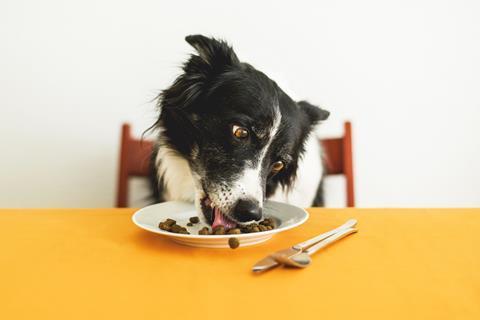 As the premiumisation of petfood continues, 76% of owners say they would spend any amount to keep their pets healthy

Petfood is one of the fastest-growing segments in the food industry right now. The humanisation of petfood is showing no limits, which is driving premiumisation and margin gains for operators. According to Euromonitor, the petfood market was worth £67bn in 2018, but is forecast to grow to £102bn by 2024.

Pet ‘parents’ are brand loyal, meaning private label penetration is low. Longer-term trends around ageing populations and smaller household sizes should help accelerate growth. Pet ownership among millennials is (perhaps surprisingly) higher than older generations, boosting growth. Given the strength of the emotional bond, 76% of owners say they would spend any amount to keep their pets healthy.

The two perceived chocolate players – Mars and Nestlé – dominate petfood, with a combined 45% global share. Mars is slightly ahead of Nestlé, but Nestlé has been the big share gainer. Not quite an oligopoly, but a very disciplined market nonetheless. Deals have really stepped up in the space, with General Mills’ $8bn acquisition of Blue Buffalo in the US in 2018 the big surprise. It was expensive given it had no prior presence in the category, but growth has been good.

Plant-based pups: why fake meat is the latest human trend moving into petfood

For retailers, pet owners have higher-than-average basket sizes, but e-commerce has eaten into the traditional dominance of supermarkets and the pet store channel. The other important channel is veterinary, where competitors are investing in animal clinics to boost their credentials with vets, but this ultimately depends on superior treatment options. Nestlé recently partnered with IVC, which has 1,100 clinics in Europe and has launched products that calm anxious dogs and catfood that reduces human allergic reactions to cat hair. Colgate’s Hill’s brand also has a very good offer in this area, though questions remain about how core it is in its largely HPC portfolio long term.

In emerging markets, growth is coming from calorific conversion, ie the percentage of pet calories coming from commercially prepared petfood vs food scraps. Petfood could be the next infant formula in China. The Chinese pet market is already more than £5bn and growing 30% per annum. It is set to be 10% of the global market vs 1% a decade ago.

In H1-19, Nestlé grew its global petfood operation more than 6% organically, contributing a quarter of its entire group growth. This is very impressive despite lacking a big presence in Asia. With margins more than five percentage points above the rest of the Nestlé portfolio, it’s also very profitable growth.

We think the next frontier is personalisation. Nestlé’s acquisition of a majority stake in Tails.com in the UK received limited attention, but could be a game-changer. The idea was simple: dogs need specific tailored nutrition through their lives rather than an ineffective one-size-fits-all approach. This old approach may explain why 50% of UK dogs are overweight, double the level a decade ago.

Tails.com has built a customisable model which, unlike many DTC operations, is profitable at scale using a unique algorithm to create optimal nutrition delivered directly to consumers’ doors. If Nestlé is able to leverage this technology and its first-mover advantage to its enormous US pet business, it could represent one of its best deals in years.