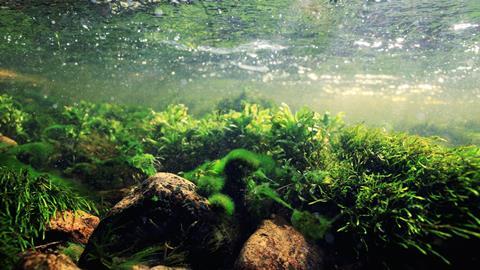 Easy-to-produce vegan protein made from algae could feed a soaring population – but will consumers go for it?

Strange but true: pond slime could hold the key to feeding the planet. That’s according to the growing number of companies cultivating fresh and saltwater microalgae for use in food and drink. Such operators are multiplying like, well, algae in the hot sun right now.

Investment in UK food and drink startups that use algae is soaring. In 2011, three deals raised a total of £314k. Last year, eight deals raised £8.5m, according to research company Beauhurst. The global market for microalgae for human consumption was worth $590m in 2018 and is expected to hit $970m in 2025, says Japanese company Sun Chlorella.

Still, eating algae remains a niche idea here. Beyond seaweed, UK consumers remain pretty clueless about the stuff. A trendy few may have been supping smoothies and supplements containing chlorella and spirulina, the most widely used of the microalgae cleared as food by the EU, for a while. But most have no idea what they even are - 42% of consumers said they had never heard of spirulina in a poll of 855 people conducted by Streetbees for The Grocer.

That could soon change. For microalgae is set to be the next sustainable, plant-based protein to make waves in the food and drink world.

And this goes far beyond supplements or trendy juices (see Innocent’s new Bolt from the Blue with spirulina) aimed at the health-conscious few.

“Algae is the future of food,” says Heather Mills, founder of plant-based food manufacturer and brand incubator VBites. Her company has built a 600,000 sq ft production facility in the north east of England. Creating meat alternatives using algae protein isolate is a priority for what she dubs her ‘plant-based Silicon Valley’.

“At the moment the world is going nuts for soya and pea protein but that will soon be very yesterday,” she argues. “We are doing mushroom and oat-based products, but the future belongs to algae.

“The most exciting opportunity is in alternative protein for human consumption”

“It’s rich in protein, grows like wildfire and creates just a pinprick of the waste associated with animal-based and other protein sources.”

Similar innovation is being developed across Europe. Dutch supermarket chain Jumbo began selling burgers made with spirulina in 2016.

Earlier this year, French startup Odontella said it would launch a patty, billed as the ‘steak of the sea’, made with microalgae, by the end of 2019. It also plans to launch algal alternatives to caviar, prawns and scallops.

Algae production is ramping up to meet this demand. From next year, startup AlgaeCytes is set to produce up to 200 tonnes of algae-based protein annually from a new production facility in Kent.

London-based Firglas is currently building a facility in Spain, also expected to begin production next year. That aims to produce more than 50 tonnes of algae per annum.

“We have customers wanting both spirulina and chlorella so we will be producing both in ponds and light-fed tubes,” says Firglas founder Fredrik Adams. “We’re looking to address the fish feed, food supplements and alternative protein markets. The most exciting opportunity is in alternative protein for human consumption. That has been held back by lack of production capacity. That is about to change.”

It couldn’t come at a better time. The meat and dairy industry is on course to overtake oil as the biggest source of greenhouse gas emissions, an Institute for Agriculture & Trade Policy study found last year. The global population is expected to hit 9.8 billion by 2050, up from 7.7 billion today. To feed that number, proponents of plant-based diets say mankind needs to cut its reliance on animal products.

Consumers are taking note. The number of vegans in the UK has quadrupled, albeit from a small base, to 600,000 [The Vegan Society]. A far larger number are simply cutting back on animal products. A third of the UK population is now eating less meat and fish than two years ago, and 32% plan to reduce their consumption even more over the next two years, according to the 2019 Waitrose Food and Drink Report.

“Chlorella and spirulina are being explored for their CO2 capturing ability, which shows potential for a number of important eco-applications, but also makes them a very important eco-alternative as we begin to turn away from less ecological foodstuffs.”

Van der Molen of Moving Mountains also names algae as an “all-natural and sustainable” source of protein. “It requires significantly less land, less water and produces less greenhouse gas than animal protein.” Plus, he points out that it “grows continuously and can be harvested at a greater rate than other sources of plant-based protein”.

There remain key barriers to mass market adoption, however. Of the 20,000 known algae species, fewer than 10 are cleared for use as food in Europe, says the European Algae Biomass Association. The main three are spirulina, chlorella and odontella. Tetraselmis chuii was more recently cleared through the EU Novel Foods approval process, in 2018.

In May, the European Algae Biomass Association said seeking approval for more algae strains as novel foods was a “complex and expensive” process. That was creating a bottleneck and “slowing down growth in the sector”, it warned.

Price is another barrier at play. “Soya protein is selling for around $1.50 a kilo at wholesale while you’d get quoted between $18 and $20 a kilo for algae protein produced in China of commensurate quality,” says Firglas’ Adams. “Better established, quality producers are selling at up to $80 a kilo.”

Nevertheless, prices are now coming down as production of microalgae cleared under the EU novel foods act comes online.

“We really are starting to reach critical mass in terms of production capacity as demand rises,” explains Jill Kauffman Johnson, head of global market development for algae at Dutch multinational Corbion. “The investment the industry is seeing proves that algae is no flash in the pan.”

Plus, it has potential beyond human food. Tesco is planning to source more fish that are fed on algae-based feed, as part of its pledge to cut the amount of farmed salmon raised on feed containing wild fish. Last month, Thai Union announced that it would produce a ‘zero fishmeal’ algae-based feed for farmed shrimp by 2020.

“Algae is the original source of the omega-3 you find in fish,” explains Kauffman Johnson. “What they’ve always done for fish feed is grind up smaller fish to give farmed fish the oils they need.

“Now they’re replacing that with algae, which is far more sustainable. It means some farmed salmon is now a net protein producer (rather than requiring more protein to grow than it creates). They’re cutting out the middle fish and going straight to the source.”

Mankind needs to do the same, says Mills. “My aim has always been to feed people directly through plants rather than via animals,” she says. “Essentially, algae converts sunlight and CO2 into oxygen and biomass that can be used to feed people. It could literally solve the problem of world hunger.”

If, that is, it can be made cheaply enough.

Was the solution here all along? Algae explained 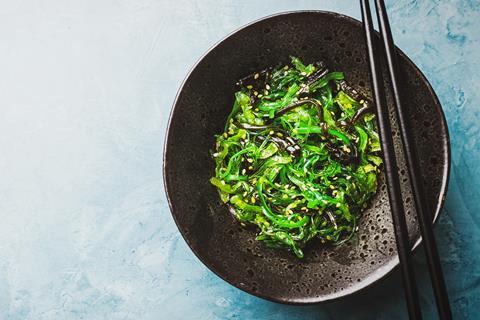 Algae is almost as old as life on earth itself. Microscopic species known as microalgae are thought to have evolved around 3.5 billion years ago. Seaweed, or macroalgae, came much later, around 800 million years ago.

“Macroalgae contains a lot of cellulose, the purpose of which is structural; to keep the plant upright,” says Fredrik Adams, founder of Firglas, which will soon begin producing food-grade microalgae. “This mostly can’t be digested. Microalgae is different in that much more of it is nutritiously valuable and useful to human beings.”

Just how valuable microalgae can be is a relatively new discovery. Until recently, it was understood that the three fatty acids that make up omega-3 (ALA, DHA and EPA) could only be found in fish. Because the body cannot make omega-3 itself, it was thought that humans needed to eat fish to get enough of it.

Until, that is, the source of the omega-3 present in fish was discovered: microalgae, a foundation of aquatic food chains the world over. Now manufacturers are growing microalgae in vats or tubes under light or in fermenters to extract the essential fatty acids and other nutrients from these organisms.

There are thousands of species of microalgae on the planet and they are estimated to be responsible for around half the world’s atmospheric oxygen. Yet, as it stands, only four species of microalgae have been cleared for human consumption in the EU: freshwater species chlorella and spirulina and marine species odontella and tetraselmis chuii.

Chlorella and spirulina are the most established forms of edible microalgae. But they are far from mainstream. Twenty per cent have tried spirulina and just 11% have tried chlorella.

Still, things could change quickly, given their environmental credentials: 71% told us they were trying to avoid foods that are damaging to the planet and 44% said they’d be prepared to incorporate algae into their diet. Only a quarter of that number (11%) are prepared to try insects [Streetbees]. 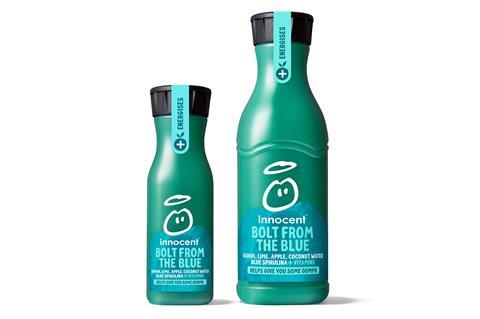 Innocent Bolt from the Blue

Blue food is a rarity. The latest addition to the Innocent Plus juices range gets its unusual hue from the microalgae spirulina, which the brand says provides an extra blast of vitamins E, B1, B2, B3 and B6. 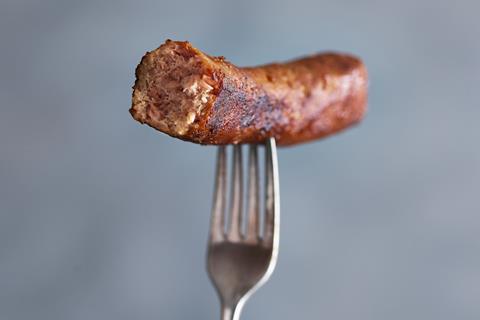 ‘Bleeding’ burger pioneer Moving Mountains has come up with a banger it says “looks, sizzles and tastes just like pork”, while its algae-based skin gives the banger that sausage-like “snap”. 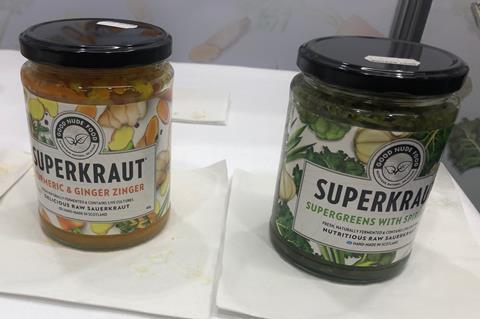 Scottish brand Superkraut is looking to cash in on the trend for fermented foods with this line. It says the blue-green algae gives the product extra vitamins, antioxidants, iron and protein. 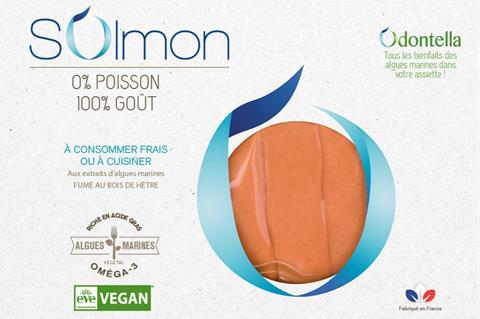