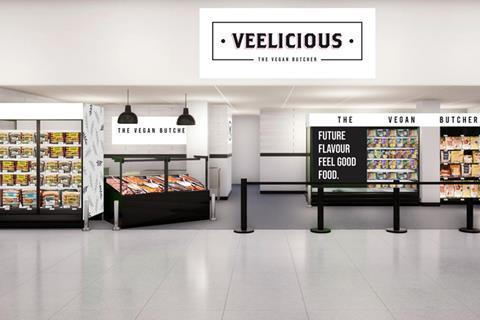 Asda has announced it will trial a vegan butcher concept at its Watford store in a bid to further boost its plant-based credentials.

The retailer has also announced a substantial expansion of its own-label plant-based range for Veganuary.

Opening from next Monday (11 January), the new ‘Veelicious’ counter is set to offer consumers a selection of products such as meat-free lamb, black pudding and base cooking sauces. Prices for the products will start from 75p, the retailer said.

The counter has been launched through a partnership with London-based vegan concept creator Kbox Global and will run for an initial period of six months.

It comes amid a surge in interest for vegan products, with Asda revealing searches on its website for the term ‘vegan’ rose 175% year on year across the whole of 2020.

“The demand for vegan products is on the rise and we have seen a surge in people seeking out ways to easily enjoy a plant-based lifestyle,” said Asda’s chief strategy officer Preyash Thakrar.

“Veelicious will be a ‘test and learn’ trial to help us understand what resonates with customers to enable us to enhance our plant-based proposition.”

Asda has also announced a 22-strong line-up of own-label chilled, frozen and ambient plant-based NPD for Veganuary, which is set to roll out in-store from tomorrow (5 January).

The new additions to the retailer’s vegan range, which was first launched in January 2020, cover products such as meat-free ingredients, ready meals and baking kits.

These include a soy-based mince, lasagne ready meal and a batter mix for banana bread.

In September, Asda claimed a ‘UK first’ when it opened vegan ambient aisles across 359 of its stores.