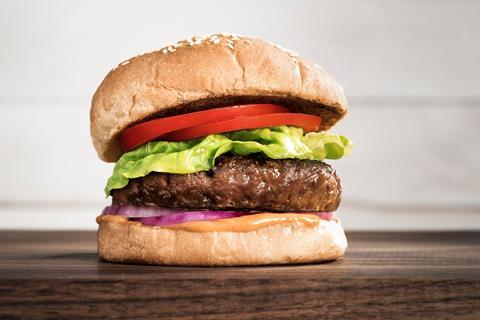 The Beyond Burger will be in Sainsbury’s chilled aisles

Beyond Meat is to significantly increase its presence in UK supermarkets after launching its flagship Beyond Burger into a swathe of Sainsbury’s stores this week.

The brand has rolled out its pea protein, coconut oil and potato starch-based burger (rsp: £5) into the chilled aisles of 372 Sainsbury’s stores. At the same time, it has also made its debut at Gourmet Burger Kitchen, in 41 outlets.

The new listings follow the start of production at the brand’s co-manufacturing facility in the Netherlands in June. The new facility “brings production closer to the consumer” in Europe, rather than importing products from the US, Beyond Meat said.

The new listings come just under two years after the US plant-based giant first went on sale in Tesco. It has since been listed by UK retailers such as Ocado and Holland & Barrett and foodservice and hospitality operators such as JD Wetherspoon, BrewDog and Honest Burger.

Production of the Beyond Sausage, which is currently only available in Tesco and some foodservice outlets, would also shift to the Netherlands “in due course”, said the brand.

European production represents “an investment in the markets we serve but is also expected to allow us to leverage local supply chains, improving our cost structure and sustainability of operations”, it added.

“The UK continues to be a crucial part of Beyond Meat’s long-term growth strategy in Europe,” said Beyond Meat chief growth officer Chuck Muth.

“We know consumers are looking for more diverse protein options, so we are proud to partner with some of the UK’s favourite retailers to make Beyond Meat’s products more accessible.”