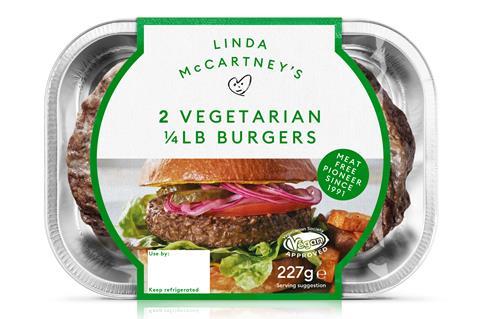 The rosemary and soya protein-based roast went on sale at the end of March in Ocado (rsp: £3.50), and will roll into Waitrose and Tesco on 17 May, followed by Morrisons on 24 May.

The brand’s frozen vegetarian chicken pieces (rsp: £2.20) will accompany the roast’s rollout in the same retailers.

Meanwhile, its chilled variant (rsp: £2.79) alongside Linda McCartney’s seasoned soya protein and onion burger (rsp: £2.79), will go on sale in Sainsbury’s from 21 April.

The brand said the new burger was a chilled offering of the “much-loved” 1/4lb burger it sells in the frozen aisles, which was in the top two for the category.

“It’s so heartening to see the number of people looking to reduce their meat consumption continue to rise,” she added. “We believe that Linda McCartney’s is well placed to capitalise on this opportunity.”

The NPD were “full of flavour, versatile, and we hope they will become a firm favourite when reconnecting with friends and family throughout the summer and beyond”, she said.