Macsween launches vegan haggis into the US 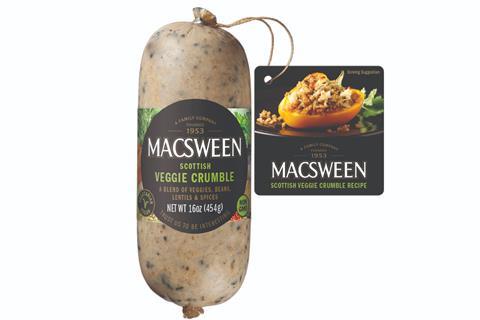 Macsween of Edinburgh has launched a vegan haggis in the US as it looks to capitalise on the country’s “far more sophisticated” meat-free market.

The company’s Scottish Veggie Crumble is its first US export in 50 years, after the country banned traditional haggis for containing sheep’s lung.

Meat-free haggis has soared in popularity in recent years, with producers now expecting surges in sales ahead of Burns Night on Saturday.

However, Macsween MD James Macsween said he believed meat-free producers in the UK were failing to capitalise on a significant opportunity across the Atlantic.

“[The vegan market] is far more sophisticated and has been a trend for a significantly longer than the UK,” he said. “Our aspiration is now to double our export number every year.”

Survey results of small food producers released by Defra last week showed less than 8% of small businesses were exporting to the US, though almost one in four sends products to the EU.

Uncertainty due to Brexit was cited by many respondents as the main factor limiting their growth abroad.

But having also recently expanded into Canada and Singapore, Macsween said he believed the industry must learn to cope with “whatever is thrown at them”.

“We have to continue to look for opportunities either domestically or internationally despite all the political uncertainty,” he said.