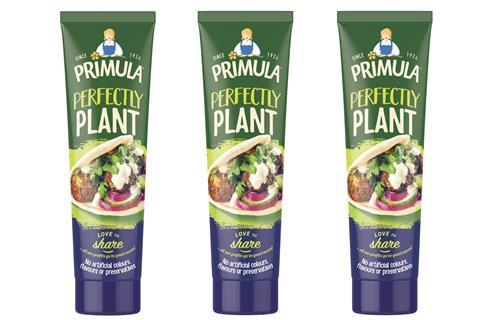 Long-life cheesemaker Primula will make its first move into dairy-free in 2022 with the launch of a vegan squeezy cheese.

Perfectly Plant will be sold in the brand’s familiar tube format with an rsp of £1.60.

According to the Kavli Group-owned brand, the Vegan Society-approved recipe had been 24 months in the making and was aimed at both flexitarians and vegans.

“With younger generations significantly more likely to follow a meat-free diet, a plant-based product was the obvious next choice for us,” said Primula NPD manager Nicole Herbert.

“We worked closely with vegan consumers to develop the flavour. This will be the first vegan processed cheese alternative in the UK, developed in a fully recyclable tube.”

The brand moved to fully recyclable packaging earlier this year after doing away with an aluminium layer insert that was previously featured in its squeezy tubes.

The NPD comes amid a flurry of activity in the dairy-alternative cheese sector.

Last month, Boursin revealed it is dipping its toe into the non-dairy cheese category for the first time with a Plant-Based Garlic & Herbs alternative inspired by its original Boursin recipe.

And in September, Scottish vegan cheese brand Sheese unveiled a dairy-free hot cheese bake as part of its foray into the hot cheese segment.