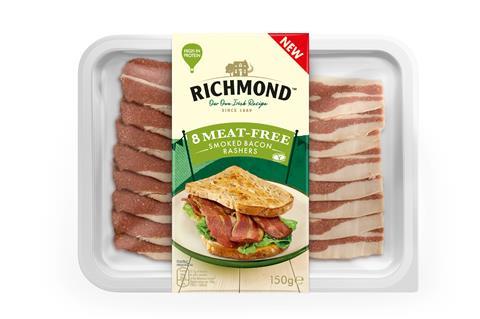 Richmond has continued its plant-based NPD blitz with the launch of a new vegan smoked bacon alternative.

Targeted at families, the soy protein-based rashers were said by the Kerry-owned brand to trump other bacon alternatives on the market in terms of taste and texture. Kerry also claimed the product boasted better health credentials than standard bacon made from pork (rsp: £2.50/150g).

The brand said the NPD contained less saturated fat, less salt and fewer calories – weighing in at 174kcal per 100g compared to the 267kcal per 100g found in standard smoked streaky bacon SKUs, according to the brand.

Hitting chillers in Sainsbury’s, Tesco and Waitrose from next Friday (28 May), the NPD is set to be the focus of an accompanying £3.5m ad campaign which will take in a new 20-second TV creative alongside shopper activity, VoD, digital and social media.

Richmond said it had identified a growth opportunity in meat-free bacon, as its research found standard bacon took up 8.1% of total meat value sales while plant-based versions accounted for just 4% of equivalent meat-free sales.

“We think there’s headroom for growth around family audiences. [There’s an] opportunity to leverage the strength and scale of the brand to be a recruiter of family shoppers into the meat-free category which, historically, has appealed to a pre-family, millennial audience,” said category and marketing director at Kerry Foods Victoria Southern.

It follows a period of major expansion by the brand. Last September, it added a soya and wheat protein-based burger to its range, while in March, it launched meat-free meatballs and mince. These were followed by a swathe of frozen NPD which hit Iceland stores in April.

The five fastest-growing plant-based brands in 2020

While Southern added Richmond would continue to explore other plant-based proteins and formats, she said the latest NPD was likely to be the last plant-based innovation for the next six to 12 months as the brand focused on consolidating its sales gains and driving more consumers to its existing products.

Since launching its first meat-free product in 2019 after having acquired Dutch maker of textured meat alternatives Ojah the previous year, Richmond’s plant-based arm has grown its market share to 4.6% with retail sales of £21.2m [IRI 52 w/e 18 April 2021].

But despite this quick growth, its meat-free sales are still dwarfed by the brand’s meat offering. Overall, the brand recorded sales figures of £148.5m last year, as reported in The Grocer’s Britain’s Biggest Brands supplement.

“We’ve still got a clear centre of gravity as a [meat] brand and being anchored in those sausage mealtimes. But we have ambitions in meat-free to extend and expand and play an even more important role in family meals,” Southern said.

Meanwhile, when asked about the current state of play in retailer merchandising of meat-free SKUs, Southern said she believed more needed to be done to ensure an easier experience for shoppers.

“There are opportunities for retailers in terms of helping shoppers to better navigate [plant-based] fixtures and to be thinking about how they merchandise by product type but also by mission,” Southern explained.

“You do tend to find there’s a bit of a myriad of products in that fixture. Also, you go into Tesco and Sainsbury’s, for example, and the experiences are different. We know shoppers are shopping across different retailers. Making that experience more seamless for consumers is going to be important [for continued sales growth].”

Southern added measures retailers could take included improving PoS messaging and introducing aids such as shelf-strips and aisle fins. She also said she felt plant-based fixtures remained the best place to host meat-free products but hoped these products could sit within their parent categories in meat aisles once plant-based achieved the right range and scale.