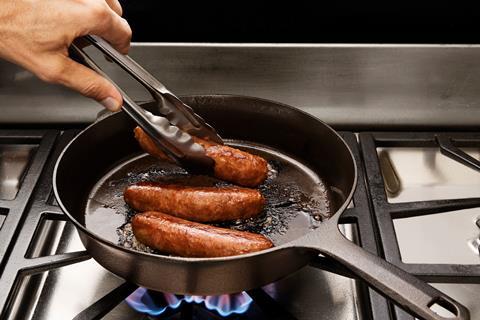 Meat-free titan Beyond Meat has floated the possibility of a major expansion of its UK product range after registering trademarks for four new products.

The US plant-based brand, which holds retail listings in Tesco, Sainsbury’s and Ocado, currently has two products on the UK market – its flagship Beyond Burger, launched in 2018, and the Beyond Sausage, which it launched a year later.

However, this duo could soon be joined by completely new products Beyond Hot Dog and Beyond Steak, as well as Beyond Breakfast – a product that may be related to its frozen vegan sausage patty and links range, which comes in Classic and Spicy variants and is made using pea and rice protein.

Beyond Meat also trademarked Beyond Pulled Chicken – a product that would mark its first move into the meat-free chicken market and was first mooted by the company’s chief growth officer Chuck Muth in an interview with The Grocer last year.

The company previously took out a trademark for Beyond Mince in 2019 – a product that has not yet appeared in the UK. However, Muth said it did plan to bring it to the UK.

All four products have been registered with the UK’s Intellectual Property Office.

Beyond Meat has not responded to requests for comment.

It comes after Beyond teamed up with PepsiCo in January for a joint venture called The Planet Partnership that would aim to develop new plant-based snacks and drinks using Beyond’s technology and PepsiCo’s marketing and commercial expertise.

The brand also extended its European reach last summer through the opening of its first factory on the continent.

Located in the Dutch municipality of Zoeterwoude, the facility is owned and operated by its distribution partner Zandbergen World’s Finest Meat and began production towards the end of 2020.

At the time, Beyond said the move would help it gain “more efficient” distribution of its products across the EMEA region and would thus allow its products to be “more affordable”.

It also acquired a second site in the Netherlands last year, which would become its innovation hub and the base of its plant protein ingredient manufacturing arm.