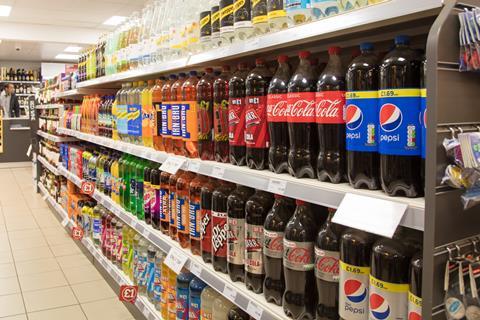 Consumers would pay a deposit of £4.80 for a 24-can multipack, compared with a deposit of 80p for four large plastic bottles containing the same amount of liquid

A flat rate £20p charge for a bottle deposit return scheme could lead to an extra 823 million plastic bottles a year being produced in the UK, according to a new report.

Alupro conducted research among 2,000 UK adults. who were asked to imagine there was a 20p deposit on every can or bottle of any size, as has been proposed in Scotland - the first place in the UK to implement a DRS.

It means consumers would pay a deposit of £4.80 for a 24-can multipack, compared with a deposit of 80p for four large plastic bottles containing the same amount of liquid.

“When faced with this choice, two thirds of those currently buying cans in multipacks would be likely to switch to the plastic bottles,” said the report.

“Even if the deposit was 10p, half (51%) said they would still be likely to choose the plastic bottles over the multipack of cans.”

This suggests bringing in a UK-wide DRS - as has been proposed by the government in its environment white paper - could result in 65.9% of multi-pack consumers switching to two-litre PETs - equating to an extra 823 million extra plastic bottles, Alupro said.

Although under DRS consumers would be able to recoup their deposit by taking their empty containers to a designated collection point, one in five people (19%) would still end up using their recycling bin at home, the survey suggested.

“We are very concerned that if the same deposit fee is applied regardless of container size, it will have a significant impact on multipacks of aluminium cans,” said Rick Hindley, executive director of Alupro.

“The majority of consumers buy multipacks, and these will become twice as expensive as the equivalent volume in plastic if a deposit return scheme is introduced with the same deposit fee. This would be a significant upfront cost for household budgets and, as our survey has confirmed, it will influence purchasing habits.”

This outcome could be avoided if a variable deposit fee based on the size of the container was charged, he suggested.

The Grocer has previously revealed major disquiet among suppliers at the 20p flat rate proposed in Scotland, which it is widely thought could be replicated in the rest of the UK.

Senior industry sources have called for an independent body running such a scheme to have power over the deposit levels so it can ensure the financial levers do not distort their market.

Critics have previously pointed out that when DRS was launched in Germany, there was a large shift from multipacks to large-format PET bottles.

“We urge the Scottish government and UK government to consider the impact of other schemes; the German drink can market is only just starting to recover following the introduction of a poorly designed deposit scheme in 2003 that all but wiped out can sales, which plummeted by 96% almost overnight,” said Hindley.

“Our survey found 83% of people are concerned that a deposit return scheme could increase the consumption of plastic. We must avoid this scenario playing out in the UK.”