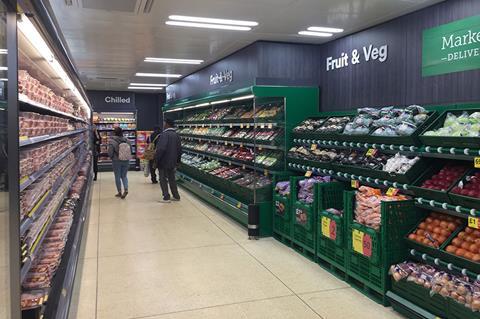 The retailer was criticised for only selling a tiny proportion (2.7%) of fruit & veg loose

Iceland has labelled a new plastic pollution report by Greenpeace as being biased towards bigger and more expensive supermarkets, after it came bottom of the league table for retailer action.

Greenpeace, and co-authors the Environmental Investigation Agency (EIA), put Iceland 10th and last in its list. This was despite the retailer having topped the table in its first year in 2017 and having reduced own-branded plastic by nearly a third by the time of the latest (third) report.

The report slammed Iceland for selling an additional 73 million bags for life in 2019, compared with 2018. It said this far exceeded a decrease in sales of single-use carrier bags of 5.6 million.

The retailer was also criticised for increases in plastic from branded suppliers and a tiny proportion (2.7%) of fruit & veg being sold loose.

Iceland said the report failed to take into account the price index of goods and was skewed in favour of larger stores, who could afford to sell wrapped and loose products.

It also accused Greenpeace of giving too much weight to unproven refill trials, such as those launched by Waitrose, Morrisons and Asda, which it claimed were unviable for smaller stores. 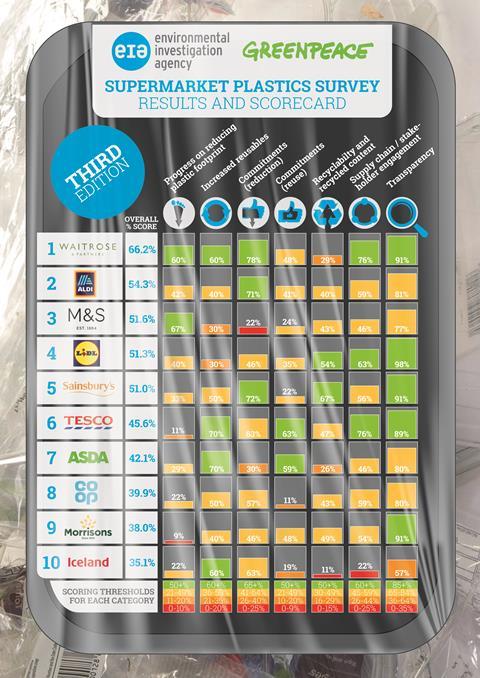 Click the expand icon to view the table full size

Iceland abandoned a trial of loose products in 2019 after its sales tanked by 30%, claiming it was economically unviable and also had seen a large rise in food waste.

Stuart Lendrum, head of packaging, quality and food safety at Iceland, claimed the report was “knowingly based on flawed analysis that significantly misrepresents Iceland’s position and achievements, while favouring supermarkets operating in a different context of larger stores or more affluent customers”.

“The report is framed around a few key themes – notably on the virtues of refill schemes, loose produce and pressure put on branded suppliers to reduce their own plastic consumption – that are always going to be challenging for a smaller discount specialist like Iceland,” he added.

“This means that it undervalues the important activity that is going on to reduce plastic in the mass market.

“Iceland remains the only supermarket to have committed to remove plastic in its entirety from our packaging, and has led the industry on transparency of reporting, being the first supermarket to publish its complete plastic footprint.”

However, Greenpeace said Iceland’s achievements in reducing own-brand plastic by 29% since 2017 had been undone by a huge rise in branded plastic in its stores.

And it warned many of the UK’s supermarkets were “treading water in the fight against mounting plastic pollution”.

Waitrose topped the table for a second successive year, while the report praised Sainsbury’s and Aldi for “market-leading targets” to cut plastic packaging from brands and own-label goods by 50% by 2025.

But it said while trials of re-use systems, such as the Asda eco-store in Middleton, were picking up pace, they needed to be rolled out nationally to have an impact on the market.

Greenpeace said Waitrose had achieved a reduction in plastic use across both its own-brand and branded ranges, with an absolute plastic reduction of 6.1% in 2019 compared with 2017. It had the lowest plastic use per unit market share of all the 10 retailers judged.

“Its efforts to reduce plastic are coupled with a commitment to expand reuse and unpackaged ranges and concerted efforts to remove single-use plastic products from its stores and cafés”, said the report.

Today Waitrose announced it was extending its Waitrose Unpacked initiative by becoming the first national supermarket to integrate Unpacked items into its regular aisles, at a trial store in Wallingford, Oxfordshire, rather than having a single Unpacked fixture.

Following the addition of 13 Unpacked options in December, the store will offer 51 lines, including frozen fruit, rice, pasta and grains, cereals, dried fruit, snacking and coffee, as well as washing detergent.

Waitrose pioneered the launch of its refillable range in some of its shops in 2019.

“We are pleased that Greenpeace’s league table has recognised our efforts to decrease our plastic packaging and pioneer unpacked shopping, but we know there’s more to do,” said James Bailey, Waitrose executive director. “We know this remains as important to our customers as it does to us so we have continued to explore ways we can do more.”

EIA senior campaigner Christina Dixon said: “We had hoped to see a much sharper downwards trajectory as strategies and targets bear fruit.

“Instead, we are looking at a relatively static picture which represents a drop in the ocean of tackling plastic pollution. The sector urgently needs to pick up the pace of plastic reduction.”