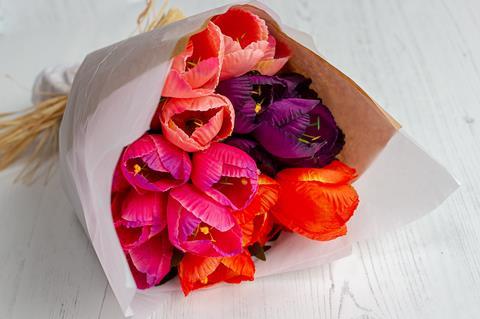 Poundland has doubled its stock of £1 faux tulip bunches in anticipation of a fresh flower shortage on Mother’s Day if there’s a no-deal Brexit.

The discount chain is warning that border delays following a no-deal Brexit on 29 March could mean flowers wilt before they cross the Channel. Some 80% of the UK’s supply comes from the Netherlands.

Fresh tulips, the most popular seasonal gifting flowers, are among varieties at risk of shortage on Mother’s Day on 31 March, according to Poundland.

The retailer has reported a doubling of its sales of its artificial flowers year on year in the first quarter of 2019.

Although it would always get in more of the faux tulips for Mother’s Day, stock levels this year would be “significantly higher” at stores across the country, according to a spokeswoman.

“Brexit will affect all businesses differently and we need to be prepared,” said Poundland’s gift buyer Frances O’Sullivan.

“Whatever the effects of the recent Brexit votes, we want our customers to carry on as normal. Gifting their mums tulips on Mother’s Day is just one part of this, so we’re making sure they can do it affordably.”