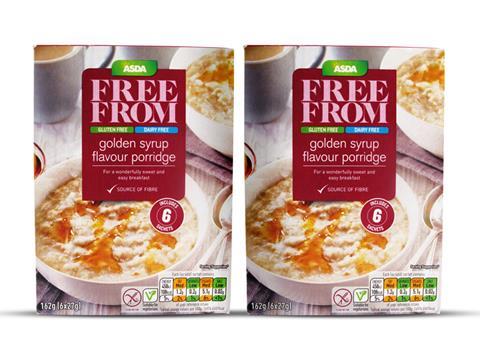 What: Free From Porridge Variety Pack

Why: Retailers came in for flak recently when research by The Grocer found some ranges of own-label free-from products can be up to seven times higher in fat than ‘standard’ products. However, this Asda porridge ducked criticism by having similar nutritional values as its regular counterparts, with a yellow traffic light for fat. The box of six sachets is a mix of variants also available in single-flavour packs: Original, Berry and Golden Syrup (pictured above).

Consumer verdict: The bright packaging encouraged a good level of pre-trial interest among our panellists, many of whom saw the product as a healthy option. The delivery was largely well received, prompting comments of “smooth consistency”, “creamy” and “fruity”. A few considered the texture “crumbly” and “gluey” and described the flavour as “bland” - but the product gained an overall score just above the norm for its category. It provided a great option for free-from consumers to enjoy midweek or as a standby, according to our testers.