Baru Our Most Fluffy Marshmallows Ever: acid test 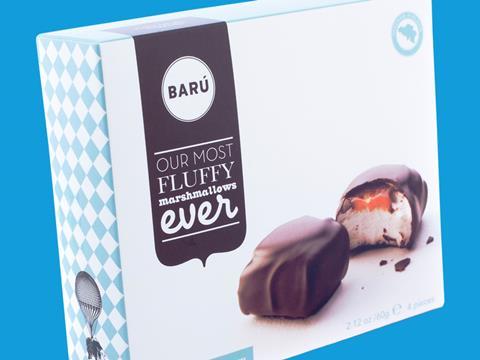 What: Baru Our Most Fluffy Marshmallows Ever with Sea Salt Caramel

Why: Despite having been tipped for some time as one of the next big things in the sweet treats market, fancy marshmallows have yet to make a big impact in mainstream retail. Baru, however, has secured a listing in Waitrose for a number of lines including these salted caramel treats sold in a box of four individually wrapped marshmallows.

Consumer verdict: At £2.99 for four marshmallows, many testers considered them “too expensive.” Despite the Belgian provenance and elegant packaging, there was some disappointment after sampling, with some testers finding the bitterness of the chocolate “overpowering” and the marshmallow “hard and chewy.” Achieving below-average ratings for many key measures, an overall score of 24 was awarded. Nearly 60% of testers said they would not buy the product, although the more appreciative testers felt they would buy them occasionally as an indulgent weekend treat.