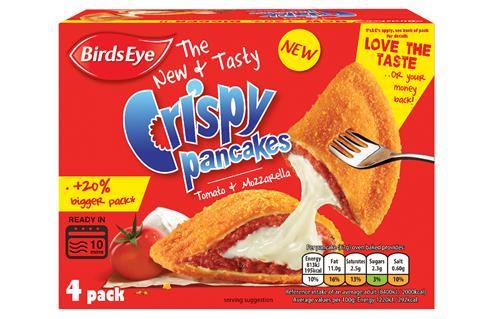 Why: Birds Eye Crispy Pancakes Tomato & Mozzarella promises a ‘modern twist’ on the traditional crispy pancake, and is part of a revamped Findus range which also consists of Mozzarella and Ham & Mozzarella. Suitable for vegetarians, the pancakes are coated in breadcrumbs and lightly fried. According to Birds Eye, the product should ideally be oven cooked from frozen in a preheated oven at 210c, but can also be grilled.

Consumer verdict: These pancakes did not disappoint shoppers who praised their “crispy” coating, “depth of flavour”, “good mouthfeel” and “great thick filling”. A few would have preferred more cheese than tomato. The pancakes were described as a “good size”, deemed excellent value for money and more than half described them as suitable for children. A few considered the design as “childish”, but others said the brightly coloured packaging would appeal to kids. Nearly two thirds claimed they would buy them at least every two to three months.