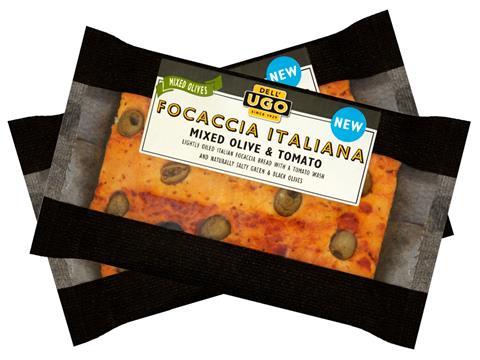 Why: Few products have suffered more painfully in the price war than wrapped bread, which has lost 8.7% of its sales value - that’s a huge £143m - despite volumes being down only 2.2% [Nielsen 52 w/e 12 September 2015]. Chilled bread, on the other hand, is one of the few areas of the category in growth [Kantar 52 w/e 1 February 2015]. Dell’Ugo has launched a three-strong focaccia range, which includes Goats Cheese & Red Onion and Cherry Tomatoes & Basil Pesto flavours.

Consumer verdict: The dark packaging and relatively high price tag meant initial enthusiasm for the product was limited among our consumers. After testing, it disappointed some testers, with panellists across different sub-groups agreeing that the texture was dry and the olive flavour too dominant. But despite being rated below average on most measures, almost half considered this a good fit for entertaining, and four out of five expected to buy it at least occasionally.