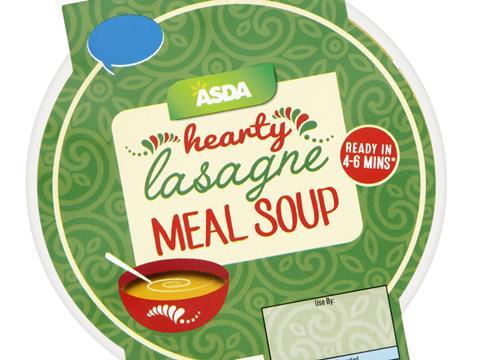 Why: Brits haven’t yet lost their appetite for canned soup - sales this year are up slightly to £352.2m - but fresh is where the momentum lies, with sales up 8.6% to £123.9m, on volumes up 14.8% [Kantar 52 w/e 19 July 2015]. While there has been no end of flavour innovation in fresh soup in recent years, Asda has gone a step further, playing with the very format of the dish in a range that also includes Boston Bean & Sausage, Indian Spiced Lentil, Thai Chicken Noodle and Creamy Chicken Casserole soups.

Consumer verdict: Most of our consumer panellists were deterred by this “strange” idea, which they thought was “neither soup nor lasagne”. It also generated some uncomplimentary comments about its flavour, smell, texture, appearance and health credentials. A minority liked the “tangy” tomato flavour, and some thought the soft pasta would make this a good option for kids - but close to half said they would never buy and described it as “not for me”.