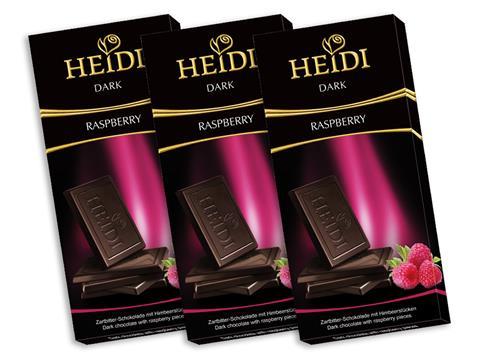 Why: Brits are buying less chocolate. Volume sales last year fell 3% as consumers sought ways to cut down on sugar [Nielsen 52 w/e 10 October 2015]. But value sales remained flat, thanks to a trend of premiumisation, with strong growth for brands such as Lindt and Green & Black’s. This raspberry-flavoured bar is one of a wide range offered by Romanian chocolate brand Heidi, including the Extreme 85% cocoa dark chocolate bar, and flavours such as Black Salt, Chili and Mint & Lemon.

Consumer verdict: Although this brand was not widely recognised by our consumers, the lure of chocolate ensured a good level of pre-trial interest, while the unusual raspberry flavour meant panellists saw this as bringing something distinct to the category. After testing, the product received high scores on every key measure, with many calling it especially smooth for a dark chocolate. Although most saw this as an occasional purchase, almost three quarters thought it would make a great weekend treat.