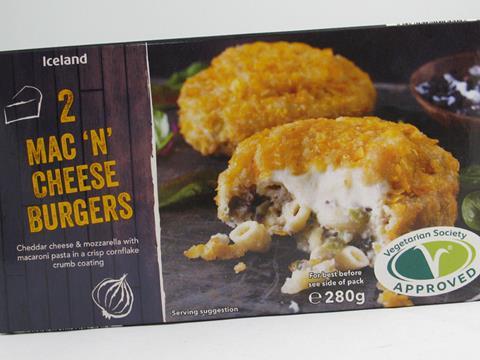 Why: Along with the all-conquering pulled pork, mac ‘n’ cheese is one of the main beneficiaries of the wave of Americana that has swept UK dinner tables in recent years. BBQ restaurants often serve it as a side, and the likes of Jamie Oliver have tried to jazz it up with the addition of lobster and other upmarket ingredients. Here, Iceland has brought mac ‘n’ cheese together with that other contemporary food trend - turning everything into a burger. The product consists of pasta tubes in a cheese, mustard and spring onion sauce, coated in crispy cornflake breadcrumbs.

Consumer verdict: Considered a highly novel idea and a good vegetarian main item by our consumers, these burgers broadly impressed after testing, especially in the North - although the flavour and texture prompted a range of responses, some less positive. It was seen as value for money, with 42% calling it a good choice for kids, while the same proportion said it was suitable for midweek. However, 27% claimed they would never buy it.