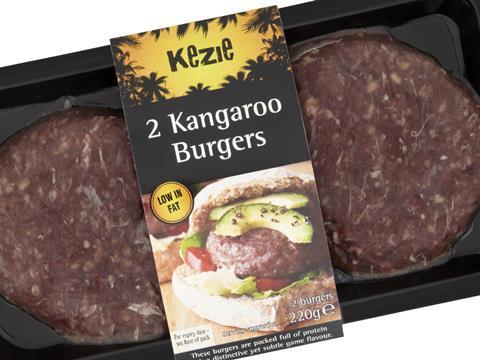 Why: Traditional barbecue meat is having a tough time of it. Burgers suffered a 25% drop last year, featuring in only 29.8 million occasions [Kantar Worldpanel 52 w/e 6 December 2015] as opposed to 40 million the previous year. Kezie is hoping to buck this trend by appealing to adventurous palates with its range of exotic meats, which includes the kangaroo burger tested here. The wider range also features crocodile, ostrich and wagyu beef patties.

Consumer verdict: Kangaroo meat was a new experience for most of our consumer panel. Though the price and familiar format of the frozen burgers made the prospect less daunting, the flavour divided opinion. Some said it tasted “rich”, whereas others said they “wouldn’t know it was kangaroo”. The product scored below the category norm because only 32% of testers said they would buy it occasionally and a further 30% said they would never buy it. Overall, consumers were more likely to purchase for novelty value than for taste.