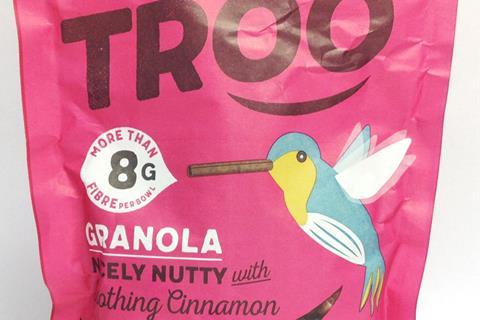 Why: Troo bills its granola as “the perfect gut-healthy start to the day”. It is made with jumbo oats from Cambridge, “lightly spiced” with a “cinnamon-boosted” spice blend, and sweetened with chicory root fibre. Per 100g, the NPD contains 464 calories, 20.6g fibre and 15g protein. It is also suitable for vegans and is gluten-free.

Consumer verdict: Fifteen per cent of shoppers gave the granola five stars, with reviews including that it had a “strong cinnamon taste and nice amount of nuts”. But several shoppers said it was too expensive, with 43% saying they would only buy it on special offer. Despite this, its paper packaging received high praise. One shopper said “I appreciate the plastic-free packaging” while another said “I noticed that this product is plastic-free which is great”. Six per cent of shoppers gave the granola one star, with feedback that the cinnamon flavour was “overpowering”, “artificial” and “too strong”.