Big four building less than a third of planned stores 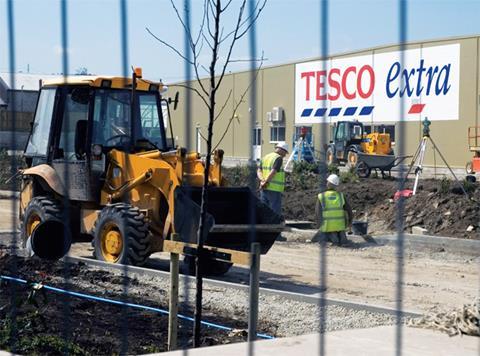 Less than a third of the big four’s supermarket projects put forward for planning permission over the past five years have gone ahead, showing the huge impact of bosses slamming the brakes on the space race.

Figures from Barbour ABI show that, since 2010, just 32 per cent of projects submitted for planning permission from Tesco, Asda, Morrisons and Sainsbury’s have been built or are being built.

A report showed that there were 556 planning applications submitted for construction of new stores by the ‘big four’, but just 179 were successfully completed or are currently under construction. 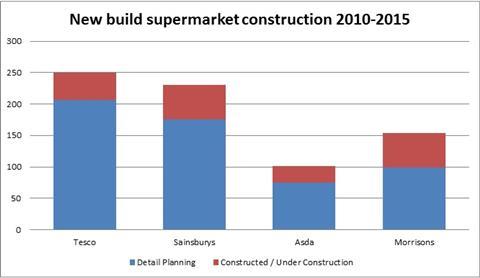 Of the ‘big four”, Tesco put forward the most planning applications with 206, but just 21 per cent of its stores have been built or are in construction. This compares unfavourably to Morrisons, who have a ratio of planned to completed or in process construction of 56 per cent.

The big four now face much tougher competition in the property market from discounters Lidl and Aldi, with the latter estimated to spend £109 million in 2015 on construction, with a target of 1,000 UK stores open by 2022.

Barbour said the major supermarkets had not been able to stop the dispersion of market share to the newer competition.

“With the ‘big four’ already having a fairly solid foundation of stores across the UK, some may suggest that there isn’t a glaring need for them to build new stores at a significant rate,” said Michael Dall, lead economist at Barbour ABI.

“However, it is interesting to note that planning approval does not necessarily indicate future development.

“Perhaps many of the supermarkets were competing for ‘development options’ rather than actually building new stores.

“Defending market share was a key strategy of the ‘big four’ as the data suggests. However given the changing nature of the supermarket sector in the UK and the concentration on price competition from the ‘big four’ this may allow others to challenge their traditional dominance by increasing construction rates.”