Ocado names Purfleet as location for its fifth UK CFC 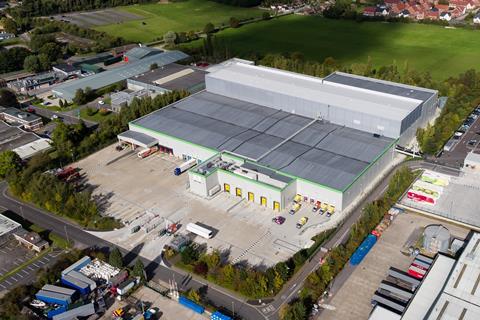 It also confirmed a timescale for rebuilding its Andover CFC (pictured), which was destroyed by fire in February

Ocado has announced the location of its fifth UK customer fulfilment centre as Purfleet, Essex - fewer than 10 miles from its automated warehouse in Erith.

The new facility should be operational in about two years, with construction work to begin imminently, the company said in its first-half results this morning.

A timescale for the rebuilding of Ocado’s Andover CFC, destroyed by a fire in February, was also confirmed, with a new ‘state of the art’ facility due to go live at the site by early 2021.

Ocado has two other UK CFCs, in Dordon, North Warwickshire, and Hatfield, Hertfordshire.

CEO Tim Steiner said that though the new Purfleet site was very close to the company’s flagship 573,000 sq ft Erith CFC, it was better positioned to serve north of the Thames.

“It is close to Erith as the crow flies but if the crow needs to get in a van they’ve got this body of water in the middle that takes quite a lot of time to cross,” he said. “So if you think about it in time rather than distance, they’re a little bit further apart and therefore it’s well positioned to serve the geography that we have, with a lot of customers north of the Thames, as opposed to Erith and the rebuilding of Andover, that can cover south.”

Analysts had predicted Ocado’s fifth CFC would be located to serve London, thanks to faster-than-expected growth and high levels of awareness of the brand in the capital.

“We always look at the whole of the geography of the country and where our customers are and where our current capacities are,” said Steiner, adding that a sixth CFC would follow Purfleet “not long thereafter”.

Ocado reported a pre-tax loss of £142.8m in 26 weeks to 2 June, compared with a restated loss of £13.6m in the first half of last year. The Andover fire led to £110.3m of costs offset by insurance payments of £11.8m to date, with further reimbursement expected.

Sales growth was 9.7%, instead of the 11.7% that could have been expected with Andover operational, it said.

Steiner revealed Ocado had stripped away plastic components from robots that helped spread the two-day blaze at Andover, which started on a section of the grid upon which the machines move.

He said no changes had been made to the grid itself but “we did remove some decorative fairings off the robots that were unhelpful in the spreading of fire”.

He said more information about the cause of the fire had been shared with international retail partners as reassurance that the CFCs Ocado was developing for them were not also at risk.

“We have a lot of information which we’ve shared with our partners about why the fire started and why it spread.

“Obviously we’ve taken remedial steps to dramatically reduce the effects of it happening again. We’ve been able to reassure both ourselves, our board, our risk committees as well as our partners that this was very much an isolated and unfortunate event.”